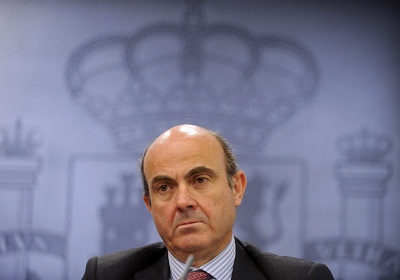 MADRID | The Spanish Economy minister Mr Luis de Guindos boldly stated to feel much the same as in the midst of the sell-out tempest, shortly after Draghi’s soothing promise. No one took seriously his assessment and yet he might be right. After all, Draghi is at best offering extra time to put the house in order. His pledge to save the euro has being interpreted as a clear signal to facilitate buying-in of troubled sovereigns. It amounts to capping risk premium, thus avoiding the threat of Treasuries being unable to place their paper.

In terms of budgetary savings that move would not introduce any sweeping change. Dispelling the ghost of a liquidity shortage does not solve the underlying deficit. Spain will still face the painful task of reining expenditure, as counting on increased receipts to fill the gap looks most unlikely in the sharp current downturn.

The Brussels obsession of fixing fiscal targets based on budgetary balance only feeds instability and speculative runs. It overlooks the nagging fact that income in a recession tends inevitably to turn shorter than expected. Real consolidation can only safely relay on bringing down structural expenses.

In this respect Mr de Guindos’s claim is far from a “boutade”. Spain has still a long way to go in ensuring full budget sustainability. For all the cuts and austerity measures implemented, it will hardly avoid a substantial deviation from its upwards revised target. Closing this year with a deficit running as high as 7% GDP will hardly placate markets nerves.

In addressing regional spending, Spain seems to incur in similar shortcomings as the Brussels approach. The central government is ready to alleviate regions credit crunch in exchange for plans to meet their deficit targets. In doing so, it would spoil a unique chance to significantly downsize their overloaded structures and manpower. Buying time while leaving deep-rooted problems as they stand will erode hopes to put public accounts firmly on foot.

Indiscriminate horizontal cuts avoid in the short run the danger of sheer collapse. But only a structural overhaul can cope with the frail foundations supporting public finances. Up to now, nothing to address such an issue seems to be in the pipeline. The 2013 accounts will only bring more austerity across the board. No reform is at bay, disregarding the urgent need to review expenses and reshuffle the tax system.

Draghi’s words do undoubtedly bring comfort to big firms confronted with huge external debt servicing. As Spanish risk premium is brought down, their creditworthiness will be revamped offering them a chance to escape from the looming liquidity squeeze they faced only some days ago. Their excessive leverage proving to be Spain’s Achilles heel, the economy as a whole is undoubtedly better off now than it was before. But their fate will be linked to  public finances being firmly anchored as soon as possible.

Be the first to comment on "Is Spain definitely out of trouble?"