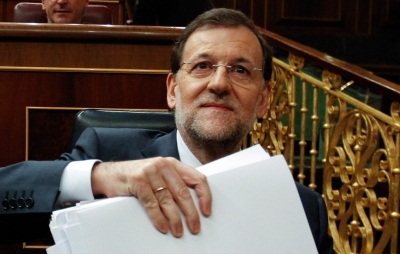 MADRID |Fernando G. Urbaneja| Premier Mariano Rajoy did not expect the economic picture to be that overwhelming, although it was predictable, nor former premier Mr Zapatero could believe in May 2010, that he was meant to play the role he so reluctantly played. Both of their reactions are part of Spain's problem: government leaders, alleged leaders dragged from the events who have to act against their beliefs.

Ms Rosa Diez (former affiliated to the Socialist Party and founder of UPyD -Union, Progress and Democracy) asked Mr Rajoy if he or any CEO had ever spent some time talking to other political groups to draft the austerity measures. It was not a trivial consideration. The government is committed to Brussels, of course, but it has forgotten its duty to convince, encourage and engage citizens and even their political opponents.

Rajoy does not seem likely to spend hours with the opposition, not even with socialists and nationalists who are often needed to form the core of stable governance. He does not need it since he has a sufficient majority and does not require any more support. But it would do him no harm to get more allies, even though they are not totally on his side or are not the essential ones. You can ignore everyone else when the plan is clear and performance it guaranteed. But the president is arguing that he has no choice, which is a poor, disappointing argument that will not get supporters.

The government has put on the table a huge package of €65 billion for 30 months, more than twelve thousand a semester. And a

lot of structural reforms that governments have been playing with for decades, many of them proposed by the Competition Tribunal presided by former Bank of Spain governor Miguel Angel Fernandez Ordonez twenty years ago.

Some fiscal measures are specific, such as tax rates rise, especially indirect taxes which are the ones that immediately collect money. That is the most effective way but not necessarily the best because it produces unpredictable side effects. The new VAT raises dangerous uncertainties and uses one of the standoff weapons available.

Cost saving measures are based on two levels: a wages cut to three million public employees, over €4 billion this year, but will also have confusing consequences. The rest of the austerity measures are opportunist and affect only the same people, over and over again.

Yet there are no substantive reforms, political regeneration, moral incentives nor civic commitment. Mr Rajoy's speech mentioned the need for “more Europe”, which is a lot, but might not mean anything. He could have raised the question of “more democracy”, “more transparency” … but that does not seem to be worrying him. Spain has a debt problem, but also an institutional crisis and lacks of political morality. The Judicial Council is still an unbearably selfish institution. Counterterrorism strategy is confusing, misleading. The territorial model is hanging by a thread and no one decides to tackle it in a serious way.

Rajoy is overwhelmed. Too much rice and very little chicken in his pot. He's outlined a fairly comprehensive catalogue of measures putting almost everything in his speech. He even expects solutions to come from abroad, but he has no project nor recipe and is likely to get his dish wrong.