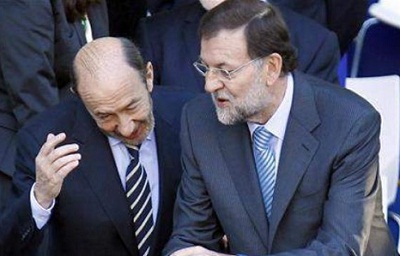 By Julia Pastor, in Madrid | Contrary to what might be assumed, on Wednesday Spanish politics answer to the EU was strong despite the severe turbulences affecting the country’s financial system: the argument is that it does not need to rescued, but its debt needs to be guaranteed. President Mariano Rajoy and the opposition leader, the Socialist Alfredo Pérez Rubalcaba, agreed to hold this position together in order to “defend the Spanish interests.”

It has been a long time since a Spanish government and its opposition party have been able to join a standpoint with just one voice. The crisis triggered by Bankia’s bailout seems to have broken the trend. According to the agreement terms, Rajoy and Rubalcaba will be in permanent contact in the near future, especially before the European Council meeting, which will take place in Brussels at the end of June.

Both politicians aim to explain that the reason why the Spanish government rejects a rescue plan is not a sort of national pride or a question of not accepting the reality. The fact is that Spain thinks that the European Union has not succeeded at all in the bailout programmes it has already carried out. If the mode

l are the Greek, Portuguese and Irish recues, their only result has been economies and societies even more depressed than they were before the EU assistance, so the answer would be a “no, gracias”. Moreover, Rajoy and Rubalcaba said it should be taken in account that the Spanish public debt is almost 20% under the European Union average.

Rajoy and Rubalcaba also share the same opinion regarding the role of the European Central Bank in easing the pressure over the sovereing debts. As all the European institutions and leaders involved in the region's economic affairs have admitted, Spain has done its homework. The country has followed to the letter the instructions given from their partners. The government developed the different reforms that were required, the Spanish leaders say. In this sense, they consider that the State has the right to ask its central bank, which would be the ECB, to guarantee Spain’s debt sustainability as well as its financing and liquidity.

Althougth it is clear that there are subtle differences between the European projects of both politicians, Rajoy does not rule out Rubalcaba’s growth proposals, and has accepted that the Eurobonds, one of the opposition leader’s main demands, would be included in the debate that the EU should open about its future and the role of the ECB.

The cooperation strategy has begun.