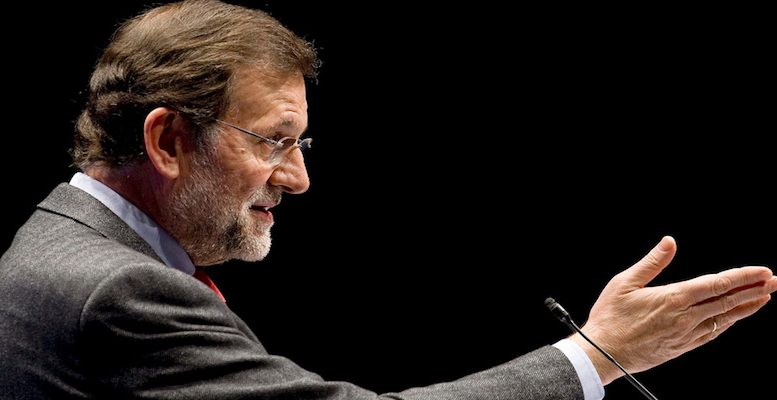 They say about Popular Party leader Mariano Rajoy, 61, that he is the only creature on earth who advances without moving. And that’s true. He has an extremely successful strategy which is one of waiting until he sees the body of his enemy at his front door, without having made a go for him directly, but waiting until things turn out “as they should.”

His faith in the primacy of common sense has been confirmed yet again, like so many times before. If the world hadn’t gone completely mad, things would not happen any other way, would be his way of thinking.

At the end of the day, his party had won the most votes and had chalked up gains between the two general elections. Meanwhile his adversary Pedro Sánchez, the leader of the socialists, tormented by the decisions of the Federal Committee and with a growing rebellion from the party’s elite on his hands, was not in a position to get what he wanted.

Now you can understand the bonhomie and even the smile on Rajoy’s face when a quite furious Sánchez shouted at him, distraught: “What bit of NO do you not understand Mr Rajoy?” Did he see his enemy as just a barking dog, not one that bites? Maybe so. There was no other option but to wait, was this politician’s view. Over-exaggerated patience.

But the one sure thing is that ten months after the first general elections in December, followed by a second round in June, Mariano Rajoy will once again be sworn in as prime minister. A few weeks ago, nobody would have put money on him in the betting agencies. And even when everyone knew that the conversations of the young – and inexperienced – leader of the socialist party with all the other political parties would not produce any result, there was still the possibility of a third round of elections. And even that, pressured by the accusations of not being such a “patriot” as he claimed to be, that he would end up throwing in the towel and going home. The PP would continue to govern, but not with him as their leader.

Not just anyone could have survived the last ten months like Rajoy has done, with an almost inhuman resilience. Now it’s easy to say that he had all the best cards, that the others were just bluffing and all the rest of it. But last spring, it’s possible that he would have been within a hair’s breadth of going down in history and returning to his registrar’s office.

All it would have needed was for Podemos leader Pablo Sánchez to have been a little less arrogant and for – and it’s not as impossible as it might seem – the Ciudadanos leader Albert Rivera to hold his nose and say Yes to a Centre tripartite agreement with the radicals as a sticking plaster.

It wasn’t so absurd. They could have brought in all the laws they wanted. And if there had been some regulations which Podemos thought stank, then they would always have the support of the PP in parliament. It wouldn’t be very difficult to ensure that Podemos remained irrelevant, giving them a few toys to entertain them – equality of the sexes, the politics of religión…

But Rajoy never gave the impression of having lost his cool even in those moments of uncertainty. Both he and the rest of the party’s top team limited themselves then, and during the next 10 months, to repeating arguments which the public understood very well: that if the PSOE couldn’t form a government and people didn’t want third elections, there was no other logical solution than to let them govern. Or form a coalition. That wasn’t such a strange thing. It had been done in Germany and in another 13 European countries.

It’s possible that Rajoy was laughing inside when he heard the confusing, complicated, absurd and lunatic arguments of Sánchez and his “boys,” which no sensible person understood and could only be understood by this particular tribe of sectarians, so typical of the Spanish political landscape.

A lot of people are now playing down how brilliant his capacity for resistance was, flagging that “if he was able to hold his own” it was because he wasn’t faced with the same internal opposition as Sánchez within his party. We should ask why. Maybe because what he said seemed logical to Rajoy’s people? And because they were ready to die with him, rather than commit the crime of sending him packing after he was the person who had won more seats? And also maybe because even Sanchez’ own colleagues did not understand his position?

The most important thing is not the fact that Rajoy has been saved, although it is, because he is giving investors and businessmen reasons to still have confidence in Spain. But it is the fact that he has saved the country from the worst case scenario: a return to times of misrule, which in this case would have been even more bloody for the country.

So all that is to be hoped for now is that the investiture is not just a gesture, but that it opens to the door to a kind of cooperation which will allow there to be a stable government for the next four years. This is something which a lot of foreign press have been calling into question in the last few days, perhaps because the chairman of the PSOE interim executive committee said that they are not going to give the Prime Minister a “blank cheque.”

Maybe not a blank cheque, but everything seems to indicate that the PSOE of Sánchez, despite its militants’ radicalism, is dead and buried. Those who hold the power in Calle Ferraz will try to capitalise on their support for Rajoy. They will ensure that apart from his usual policies – which he will undoubtedly continue with because they are the only ones possible within Europe – he will implement some measures which have a clear socialist tinge, to justify themselves in terms of the public’s opinion.

The big problem is what to do with the militants, who have taken over the power in the groups, and are pretty dangerous, both for PSOE and for the others. Perhaps it would be a good idea to give Alfonso Guerra a call. He usually knew how to sort out these problems. But then it’s always possible they will join Podemos.