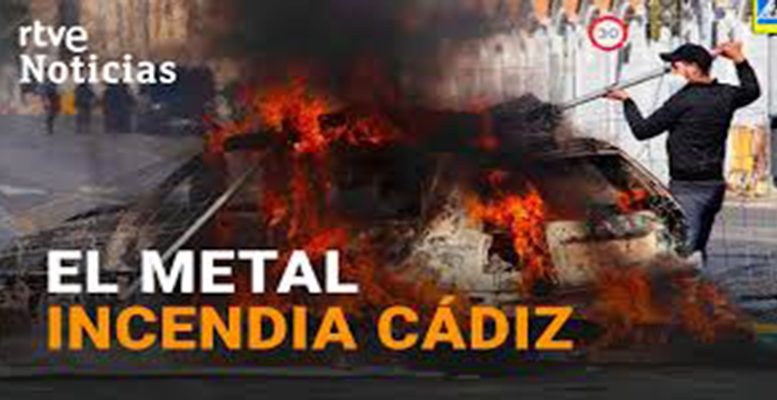 Fernando González Urbaneja | The mayor of Cádiz has taken the lead in the incendiary protests his city is suffering with a striking statement: “We have had to set fire to Cádiz so that Madrid will take notice of us”. “Setting on fire” as a political practice is nothing new; there were times when it was common, with disastrous results.

Here is a mayor with democratic legitimacy and with the legal resources to make himself heard and get people to listen. That he should give in to the temptation of fire, burning whatever they can find and disrupting the life of the citizens, including access to hospitals, is not likely to attract investment, jobs and prosperity. But that reasoning is not in the Cadiz mayor’s handbook; he has preferred to place himself at the forefront of the demonstrations and post a series of messages of support and encouragement on Twitter, justifying the violence that goes against what he calls structural violence.

The data on unemployment and precariousness in Cádiz is very striking, for a thorough analysis. A province, several regions with not a few natural resources, which seems condemned to head the rankings of unemployment, precariousness and informal economies. Decades of socialist regional and municipal governments, also with PP mayors, have failed to find the key to progress for Cádiz.

“Setting on fire” is usually an extreme means of exerting pressure with limited chances of success, amongst other reasons because of its “knock-on” effect, ie as a model to follow for demands of any kind. The mayor is appealing to Madrid as the enemy, the one who must solve the problems. By Madrid he means the Spanish government, which arrived with the message that no one can be left behind. Cádiz’s flagship industry – shipbuilding – is public, state-owned; dependent on the resources and management capacity of the government of the day, which tends to act as a promoter of contracts and provider of financing in many different ways.

It also depends on the productivity and skills of the staff of these companies. “Setting on fire” should not be the most effective way to attract clients and contracts, although it may frighten weak or very impressionable governments. We will soon find out whether this government is one of those that can be impressed by bonfires or one of those that applies the resistance manual.