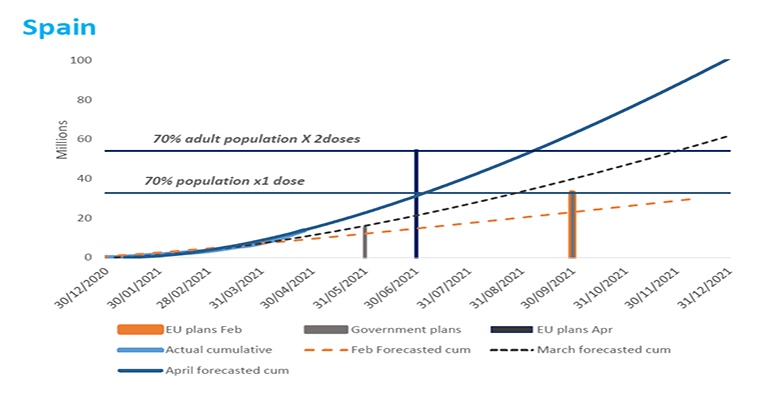 Olivia Álvarez (Monex Europe) | Major front-runners in the vaccine race like the UK and the US are now focusing on decisive reopening plans on the back of a solid pace of immunisation. In the UK, 50.7% of the population has been given at least one shot, which has led to a broad reopening of non–essential business. Similarly, in the US, 42.7% of the population have received their first jab, with some states already lifting the mandatory use of face masks. Early experience from leading countries in the vaccine race has shown that massive immunisation could successfully contain the spread of the virus. Countries with high levels of full immunisation have seen a consistent decline in daily infections, even with the scaling back of restrictions in the meantime.

Meanwhile, the EU, a significant laggard in Q1, is starting to rise from the ashes. With below 10% of the total population having received at least one jab by the end of March, the European Commission entered negotiations with main suppliers to ramp up deliveries. As a result, the EC set ambitious goals to have 70% of the EU adult population vaccinated by end-June. This accounts for 55%-60% of the total EU population.

With this same target being previously set for the end of summer, the burden to increase the pace of the vaccine rollout is now firmly on the second quarter. Reaching such a goal would require an average of 6m vaccines administered daily, which is more than double the current pace.

That said, significant obstacles lie ahead. If the experience with the
AstraZeneca and Johnson & Johnson shots are anything to go by, minor vaccine setbacks can trigger major confidence issues. Additionally, prospects of broad-base reopening could be challenged by uneven distribution across European member States, as suggested by confirmed orders. Finally, the threat of delayed distribution or new strains poses significant downside risks considering the optimistic EU goals in the following months.

In some emerging markets, however, the picture is far from rosy…
Countries like India,Turkey, Brazil and Argentina have seen a recent surge in virus infections, while prospects for vaccination are slow.
India, in particular, has captured the world’s attention with a seriously worrying situation. Over 300,000 people are infected daily and nearly 3000 people die every day, with their health infrastructure collapsing under the pressure. Looking ahead, the situation is dire considering the slow going vaccination rollout. Only 2.6 million doses have been administered daily over the last week, down from nearly 4 million in early April. At the current rate, it would take the hugely populated country two years to achieve herd immunity.

For the time being, we continue to track the vaccination rollout in advanced economies. We revise projections for the US, UK, Canada and European countries based on new vaccination records.

Under the new projections, European countries seem to be getting in shape to accomplish the new ambitious goals set by the EC, while Canada is stepping up the pace too.

The US and the UK remain at the top of the class. However, they are beginning to be outshone by catching-up European peers, as their attention shifts towards administering second doses.