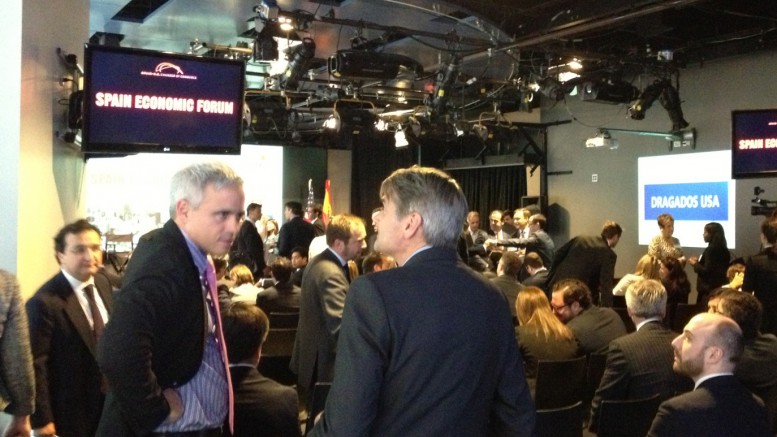 So what’s next for Spanish companies? Macroeconomic fundamentals for the country are gloomy, but there are still big firms excelling abroad and start-ups bringing fresh ideas to the table. Making this point was the main purpose of the Spain Economic Forum this Friday at New York’s Nasdaq.

Successful Spanish entrepreneurs like Indra, Repsol or Dragados addressed their international strategies and shared their insight on the challenges they face. Also, members of Sareb and Caixabank tackled the Spanish banking and financial overhaul along with some of their American peers, evaluating the impact of the banking reform. Not an easy task when all main Anglo-saxon media have written pages and pages about the dismal days of Spanish economy and its banking system.

“We need to promote our image among the US investors and clients (…) I don’t believe in government as the engine, the iniciatives have to come from private sector,” High Commisssioner for the Spain brand Carlos Espinosa explained.

But what is the so-called “Spain” brand? And, most of all, how much can it be promoted in a one-day event? Is there enough so-called national strategy? Enough road shows to promote the Spain brand?

“I believe so,” Dragados says. “We need a boost of optimism because many Spanish companies operating in the US are finding an aditional obstacle these days: being Spaniard is not an added value anymore. On the contrary, it becomes a burden when negociating with banks, for example. We need to transmit how solid and experienced in many different markets we are and this occasion is good for that.”

Smaller players also want in
Jorge Mata, chairman and CEO of ClippingBook, was happy there was a panel on Spanish “entrepreneurism” and innovation but still believes these events are always focused on helping the same people.
“We are entrepreneurs, and we can be entrepreneurs anywhere in the world. We are passionate, we don’t sleep [he laughs] and we are not asking for government support, but they support Iberia, they support the big guys, and we don’t see the same for us. Small companies only represent 1% or so of the country’s GDP but we should be at least 15%. That is one of the ways for growth. And the government needs to realize that growth should come more from people like us than from big corporations,” he stated.

Mata insisted: entrepreneurs need money. “We don’t want subsidies nor soft loans that take forever to get. We just want investment, from the government, private investors or whoever it is. We know how to use the money, we know how to recruit people, how to spend money on IT and how to manage it,” he said.

Be the first to comment on "Spain Economic Forum in the US: start-ups also want a piece of the cake"