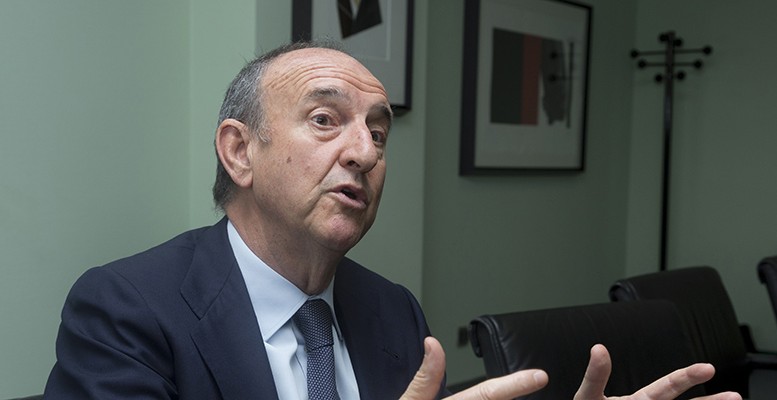 Fernando Barciela | Spain has some abilities, which were inconceivable three decades ago. A position which has been achieved through our companies’ hard work,” says Regino Moranchel, former CEO of Indra, the leading Spanish technological company and one of the four most important European companies by stock market capitalisation.

Question. The economy is growing at over 3%. It seems that the adjustments, which decimated some sectors, has restored competitiveness. What do you think?

Answer. It is absolutely true. What happens is that competitiveness through wage cuts is limited. I’m not saying it is not necessary to adjust wages to a particular situation, a negative one, at least temporarily, but in the end this is not sustainable. Productivity must be achieved through knowledge, with a more qualified labour force and more added value.

Question: Perhaps wages had risen too much in general, considering the structure of our economy, and a return to some kind of normality was required?

A: Well, I would not dare to say that this fall in wages is a good thing. Wages have to be at the levels they are, but with low wages we cannot pay the necessary taxes and maintain the welfare state. In the situation we are in, without our own currency, our response to the demands of the moment is an  adjustment through wages. As a shock effect, it may be okay, but it is not enough. We are not going to achieve long-lasting GDP growth like this.

Q:How much have wages fallen in Spain’s IT sector? It’s said that an IT technician earns more in Brazil than in Spain.

A:It is true. Salaries for computer technicians in Brazil are higher. In recent years, the demand for professionals in that country has been very high. Today the situation is different. Brazil is going through a crisis which is highlighting its structural problems. This situation can last a while.

Q:You currently live in Latin America. What do you think about Spain’s image in the region.

A: I think it is good and this is not only due to the policies carried out by our governments, but largely thanks to our companies. Today it is easier to sell Spanish products or services or do business there than it was years ago. Regardless of the temporary view that we have a very serious crisis in Spain, the reality is that our country has managed to gain a position on the world stage, not only in Latin America, which will enable us to recover all the lost ground in the coming years. The know-how and ability that Spanish firms have already developed is irreversible.

Q:But in Latin America, the way Europe and Spain dealt with the debt crisis has been criticised, sometimes with irony.

A:Well, the perception there is logical and makes sense. Namely that in the end it is more difficult for Europe to make decisions because it is not a single country, it is a group of sovereign states. But what you hear is that Europe ends up finding a solution to its problems. Furthermore, they also have an interest in it because, with the slowdown in China, they are looking again to the US and Europe.

Q:Do you have the impression, as some people say, that China is now more important in Latin America than Europe and Spain?

A:It may be so in some countries, which have dedicated more attention to China, but on the whole I would not say that. China plays a great role, it has invested a lot and is a great client, but the role of Spain and the US remains prevalent.

Q:We hear a lot about technology, startups, but regarding the industry in Spain, do you think that companies of a certain size are being created or everything is just smoke and mirrors?

A:No, I think that some things are being done. In the IT sector and Internet some new companies have been acquired or are developing their business models with some success. And we must not forget that besides the fact administrations have implemented highly innovative solutions which are being installed throughout the world, there are sectors such as banking, telecommunications, power and retail which are very involved with IT. This intense implementation of technology has allowed our companies to gain competitiveness and efficiency levels unthinkable 30 years ago. Then we must not forget that technology is not only IT. Spain has been a pioneer in developing some very important high technology sectors over the last 30-35 years. Such is the case with high-speed rail, where we have a complete and very extensive offer, from the point of view of operations as well as equipment. Or renewable energy, in which Spain is one of the leading global players. These are just two examples, but there are many more. In conclusion, I would say that Spain and its companies have some strengths that I hardly ever hear about. All I hear is criticism, complaints and emphasis on negative aspects.