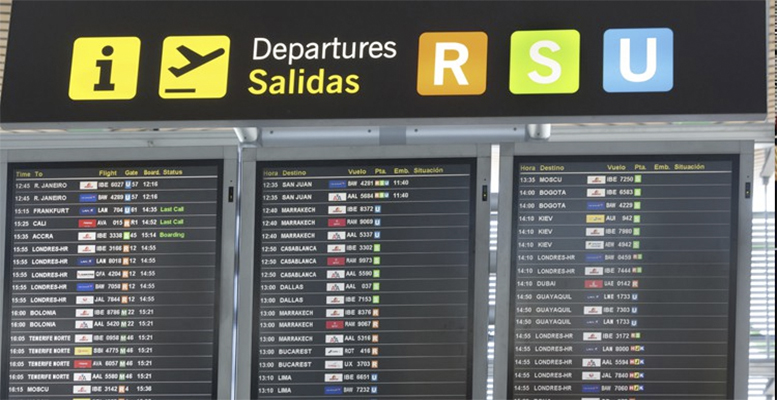 The new strain of coronavirus which has emerged in the UK has led to a long list of countries freezing air traffic with the island, including Spain. In fact from today, only Spanish residents and citizens will be able to return home from the UK. The measure, which has been taken in coordination with Portugal, will mean the cancellation of around 200 daily flights. This will be particularly prejudicial for the Canary Islands, where 1 out of every 2 tourists is British.

In some cases, such as Italy and Germany, medical and cargo flights are exempt from the restrictions. Meanwhile others like France, Latvia or Bulgaria have banned all flights without exemptions. This has surprised the UK authorities by including freight. The French ban caused the ferry terminal in Dover, in the southeast of England, to communicate the closure to traffic on Sunday. However, lorries from France to the UK are allowed to enter. However, many drivers do not want to cross for fear they will not be able to leave British territory afterwards. The Eurotunnel, which links the UK and France through the tunnel under the English Channel, has also suspended access to its terminal in Folkestone, in southeast England, for traffic towards the French port of Calais. As long as freight and transport problems persist, the UK will have another serious bottleneck there in the form of disruption to the supply chain.

Some twenty countries have already identified the new strain circulating within their borders. The new variant was found by the COVID-19 Genomics UK consortium, which has sequenced 140,000 virus genomes from people infected with SARS-CoV-2. It was first identified at the end of September. It now represents 62% of cases in London and 59% of cases in the East of England, regions where COVID-19 cases are increasing the most rapidly. Changes in the prevalence of the new mutation from 18 November to 9 December have led the UK Government to estimate that it could be up to 70% more transmissible than other variants. And could also increase the transmission rate by 0.4%.

Currently there is no evidence that the new variant causes a higher mortality rate or affects the efficacy of vaccine or antibody therapies. This has been confirmed by the World Health Organization. Mutations that make viruses more infectious do not necessarily make them more dangerous. In fact, it is quite possible the new variant causes a milder disease, giving it an evolutionary advantage, with a more rapid spread before an infected individual develops a fever and has to self-isolate.