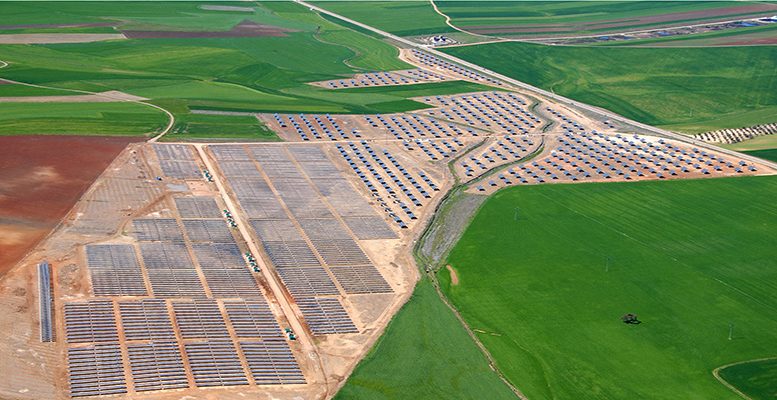 A PV plant built by Solarpack in LLerena (Badajoz- Spain)

T.C. | According to data from Red Eléctrica de España (REE), the Spanish electricity system registered a record figure on Sunday 21 March at 13:37 hours: solar generation reached 10,255 megawatts of instantaneous production, which was able to cover 37.3% of peninsular demand. It should be remembered that last year Spain installed almost 3,000 megawatts of solar energy, reaching 14,000 megawats.

As of today, the Spanish photovoltaic industry is the leader in the European Union, representing 28% of the total installed capacity. It is followed by Germany with 24%, the Netherlands with 15%, France with 6% and the rest of the EU with 27%.

Industry experts and analysts expect installed capacity to increase by 8%-13% this year and to return to its pre-pandemic pace, according to data from ING. In fact, the renewables market will be one of the few sectors to emerge stronger from the crisis. According to the “Renewable Energy and Solar Research Report: What’s in store for 2021,” the global solar photovoltaic park could grow by 130 gigawatts this year. The International Energy Agency, always more modest in its forecasts for renewables, predicts a 10% growth in installed renewable capacity in 2021 (218 gigawatts).

The European Commission and its commitment to sustainability has flagged the energy transition as one of the major points for economic recovery. Nearly 1 out of every 3 euros of the 140 billion euros that Spain will receive from the European Recovery Fund will be allocated to the progress of the energy production model. The plan is to add at least another 6,000 MW of renewables to the grid by 2030. (It should be noted that in the first 15 days of April, renewable energy – wind, photovoltaic, solar thermal, etc. – already covered 53% of demand).

Meeting the targets set for 2030, according to the European Green Pact, involves increasing the use of renewables and reducing the carbon footprint by reducing emissions 55% by 2030. A target extended by the European Parliament, which aims to reach 60%.