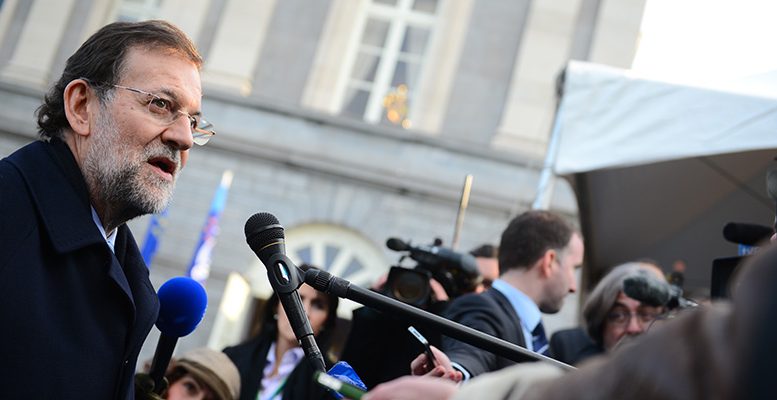 Later today, Spain’s lower house of parliament will begin to discuss caretaker Prime Minister Mariano Rajoy’s bid for a second term in office, ahead of a key confidence vote on Wednesday.

Rajoy’s conservative Popular Party has already brokered an agreement for breaking the eight-month political stalemate with centre-right party Ciudadanos, led by Catalonian lawyer Alber Rivera. As a result, Rajoy can probably rely on the support of 170 MPs. But he needs at least 176 votes to win an absolute majority on the floor of the 350-seat lower house.

If this outcome fails to materialise, which is widely on the cards, a second vote would take place probably on Friday in which Rajoy would require just a simple majority of votes cast.

But a major sticking point for Rajoy in his attempts to be endorsed as Prime Minister is that he needs one or more of the opposition parties to abstain in the investiture vote. And so far he has not secured this commitment. The main opposition centre-left Socialist Party leader Pedro Sanchez has refused even to countenance an abstention in Friday’s vote.

The failed investiture votes would be the prelude to a third round of general elections in Spain, which could take place on Christmas Day.

With regard to the impact of this week’s political events on the Spanish financial markets, experts at Link Securities say “the markets have already discounted a ‘failed’ investiture vote, but not the complex scenario which will present itself afterwards.”

“Yet another repeat of the election process will not guarantee a government,” they add.

“Over the last few months, Spanish equities and fixed income securities have performed very much in line with the rest of the eurozone, with investors supported by the ECB’s ‘safety net’.

“But we don’t think this situation can last much longer if the political situation here becomes more complicated…A close watch will have to be kept on political developments, which could end up affecting the country’s economic recovery..and Spain’s financial markets,” Link Securities says.

After failing to form a government following general elections on December 20, Spain returned to the polls on June 26.

The PP again collected the most seats, 137 compared with 123 December, but it still fell short of the magic number of 176.

The Socialist Party took second place, gathering 22.7% of the vote and 85 seats, which meant five fewer seats than six months ago. Despite these results being the worst in the socialists’ history, they were satisfied as they overtook the radical left wing alliance Unidos Podemos. However, this anti-austerity coalition was third with 21% of the vote and 71 seats. Ciudadanos came in fourth with 13% of the vote and 32 seats compared with 40 in December.