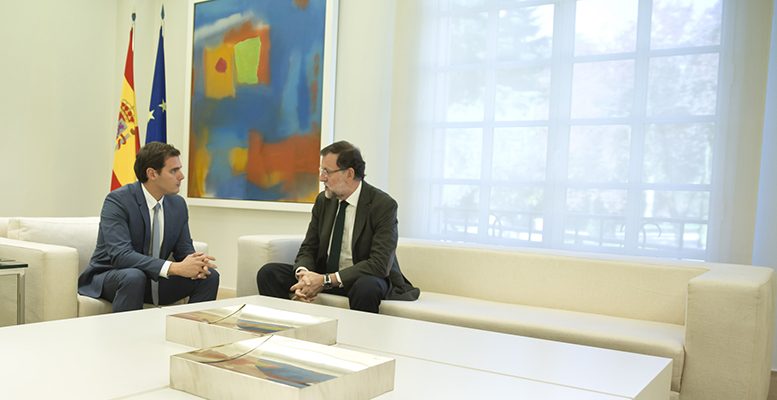 The Spanish right and centre parties have brokered an agreement for breaking the current political deadlock. The caretaker Cabinet has held office for nine agonizing months as two general elections failed to produce an outright winner. Even if the settlement reached between the caretaker Popular Party government and Ciudadanos marks a sizeable step forward, it will still fail to deliver enough parliamentary support for securing a stable government. The Socialist Party continue to firmly hold the key to power.

The deal, as any seasoned observer could expect, is no more than a crude attempt at bullying the Socialists into submission, forcing them to unconditionally endorse Mr Rajoy’s premiership. Embodying many proposals, up to 100 out of 150, previously agreed by the Socialists with Ciudadanos, this alienates Mr Sánchez. He can hardly resist the pressure of being responsible for yet another round of elections. To make sure he gets the message, the right-wing parliament chairwoman has called these potential polls for Christmas Day, should a government fail to emerge in the meantime.

The agreement embraces some sensible ideas for a middle-of-the-road approach to policies, such as education, drawn up to now in an overtly partisan way by both incumbent parties when in office. It also does away with key distortions in economic and fiscal management, striving to streamline local administration and to cut excessive red tape. The initiatives involving no extra spending seem reasonably sound and many of them may even command widespread support.

The problem lies in the populist thrust imposed by Ciudadanos. It has forced Mr Rajoy into accepting a whole range of fat new social spending with total disregard for fiscal rectitude. Worse still, they encompass perverse incentives for massive fraud and outright profligacy. Introducing a credit-wage scheme will encourage fake salaries and depress job searching and training efforts. Launching untargeted plans against poverty will swell the ranks of people receiving assistance, regardless of their real needs.

Fortunately this free ride on public expenditure will hardly fly in the absence of sufficient financial backing. Extra income from higher taxes on big enterprises and public savings will prove unable to fill the gap. As Mr Rajoy has wisely imposed the need for sticking to the fiscal consolidation path agreed with the European Commission as an overall pre-condition, if he returns for a second-term in office he will shelve or severely curb such ambitions. So even if the Socialists surrender, Spain will probably see fresh elections sooner than expected.