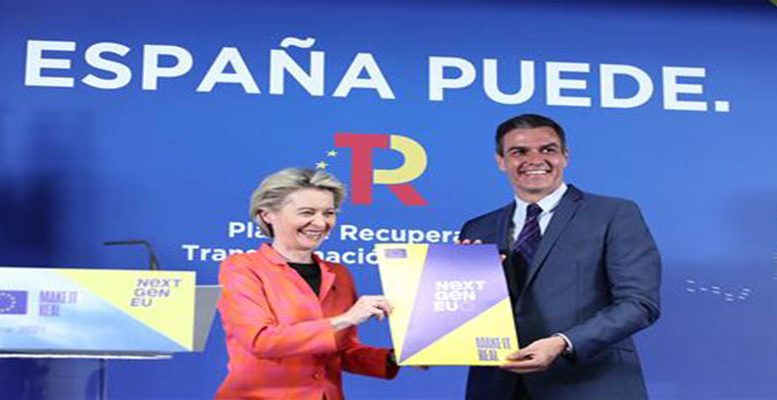 The European Union has disbursed the first tranche of the €10 billion recovery fund to Spain on Monday, European Commission President Ursula von der Leyen and Spanish Prime Minister Pedro Sánchez have confirmed.
“The first Next Generation EU payment, €10 billion for Spain, is on its way! Congratulations to Spain,” the German announced on her Twitter profile. “I hope to have more good news for other EU countries very soon”, she added. The European Commission has also confirmed the disbursement to Spain of “10 billion euros in grants to support reforms and the transition to a green and digital future”.

Pedro Sánchez, has confirmed that “the Treasury has already received the first €10 billion of the Next Generation EU funds that the EU has transferred to Spain”. “Our country is not standing still, we are moving forward with determination in the deployment of the Recovery Plan to bring progress to all people, sectors and territories”, he added.

Last Wednesday, the European Commission formally adopted the decision allowing the disbursement to Spain of the 10 billion euros of the first tranche of the European Union’s recovery fund. At the beginning of the month, the EU executive had already issued a favourable opinion for the payment. However, it still needed the approval of the EU-27, which came last Tuesday, before formalising the decision in a meeting of the committee that includes national and EU experts.

Once the transaction has been completed, this 10 billion euros tranche joins the 9 billion advance that the EU executive paid out in mid-August and which was not subject to conditions. Spain was the first EU country to submit a formal request to receive the first disbursement. It was able to do so after signing with the EU executive the technical document that stipulates how compliance with each commitment is to be verified.

The 10 billion euros tranche of Spain’s recovery plan depended on 52 milestones and targets that the government had already met. So this allowed the European Commission to conclude its preliminary analysis in just three weeks, without using up the two-month deadline available to it.
This first tranche hinged on reforms included in almost all components of the government’s recovery plan. Eight of these form part of the chapter on the modernisation of the administration, including regulations to reduce temporary employment in the public sector. Also important in this outlay was the component on tax reform, with measures such as the introduction of the digital tax, the tax on financial transactions and changes to corporate tax and indirect taxes.

This first disbursement also includes measures from the labour reform chapter, such as the law regulating teleworking, the regulation to reduce the gender pay gap and the entry into force of the action plan to tackle youth unemployment. With regard to pension reform, the disbursement of this 10 billion euros was conditional on the separation of the sources of Social Security funding, the review of individual pension plan bonuses and the modification of the maternity pension supplement. Other milestones and objectives included amongst the requirements for accessing this tranche of direct aid are the approval of the climate law, the decarbonisation strategy until 2050, the hydrogen roadmap, the Spanish circular economy strategy, the SME digitalisation plan and the national artificial intelligence strategy.