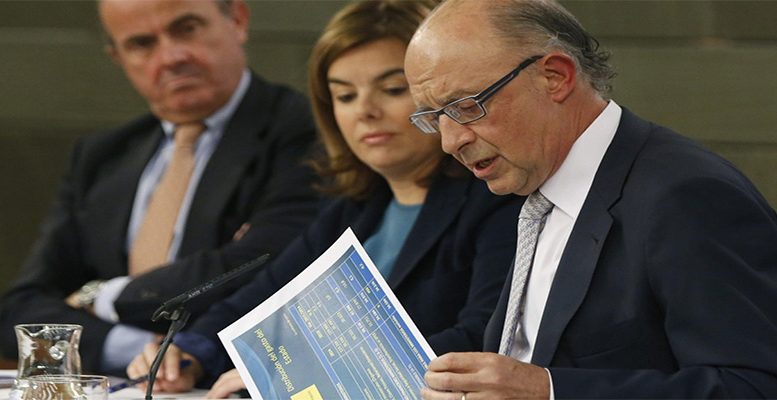 The state can only freely make decisions about 39% of what it raises or borrows. Public investment in infrastructures decreased to 7.5 billion euros, 21% lower than in 2016 and a third of what was invested in 2009.

At the beginning of this month, Spain’s Finance Minister Cristobal Montoro – who has sucked the most out of the budgets – presented the one for 2017. No less than 40% is earmarked for pensions which are only going up 0.25% per pensioner (3.1% in total for the increase in the number of beneficiaries).

Furthermore, if we add to the 139 billion euros for pensions the 32 billion euros corresponding to interest on debt (which we need if we want to keep on borrowing to pay teachers, doctors and policemen at the end of the month), plus the 18 billion euros cost of unemployment insurance, then it turns out the minister has already committed 58% of spending.

It’s a budget which leaves little room for manoeuvre. Exactly 39% of total spending if we add the 22 billion euros cost of civil servants to the previous figures. It’s possible there are some who want to leave the unemployed without any subsidies, or those who say there are too many civil servants. But if we offer some of them early retirement, or put them on the dole, they will continue to gravitate towards public spending. What is clear is that the State – personified in Montoro – can only spend 39 of every 100 euros it raises or borrows. And arriving at this conclusion, it’s impossible not to feel a shiver down the spine.

Let’s look at the accounts. Spending has had to be cut by 14% to leave the deficit at 3.1%, in line with the commitment made to Brussels, and to ensure that the 32 billion euros we pay for debt does not increase. Our debt is now 99% of GDP (the accumulation of deficits from the crisis years). And we should bear in mind that now we don’t pay much because interest rates are very low and that they can only rise in the future.

How to achieve a reduction in spending? Fortunately, we are growing income with a hike in taxes of around 7% – reaching the 200 billion euros we rasied before the crisis. But, unfortunately, it’s not the same thing with Social Security revenues. And if social spending is not adjusted – which was almost impossible when we exited the crisis after the cuts of the last few years – and if there are some areas which reasonably should see an increase – this is always open to discussion – public investment by regions will have to be reduced to 8.597 billion euros from 11.128 billion. The biggest part of this item corresponds to infrastructure investment which falls 21% to 7.540 billion euros.

The big question is whether the Spanish budget can continue to be adjusted based on such a constant reduction in public investment, and to such an extent, without seriously damaging growth. It’s worth remembering that infrastructure investment before the crisis totalled 22 billion euros in 2000, since when it has not stopped dropping sharply

Could there have been a better budget? Obviously yes, because for sure there are expenses which should be cut. That said, they are more than likely very spread out and difficult to spot from the Finance Ministry. And a bit more could be raised by hiking one tax or another to allow for more social spending, spending on education or research, on public investment or even in order not to have to exclude the cinema from the justified decrease in VAT for cultural activities. The State’s total revenues (taxes and contributions) will this year account for 38% of GDP in Spain compared to an average 45-46% in the European Union. But it has to be admitted that apart from improving the efficiency of the Finance Ministry’s methods – always difficult to do in a whole year and in this case we are talking about half – the margin for hiking taxes is not very big and it’s always a thorny issue.

The 2017 budget shows that, despite the fact the economy is doing well, we have a lot of problems. And it could be better. Montoro is a very practical Finance minister, more concerned about dealing with the accounts and balancing pensions than being a minister with convictions and ideas for the medium-term. The worst that could happen is that the budget is not approved and we would have to extend the 2016 budget. This would bring many drawbacks, amongst them the idea that Spain is a country which is fairly ungovernable. Better not to contest this medal with Italy. They are used to it and know what it implies.