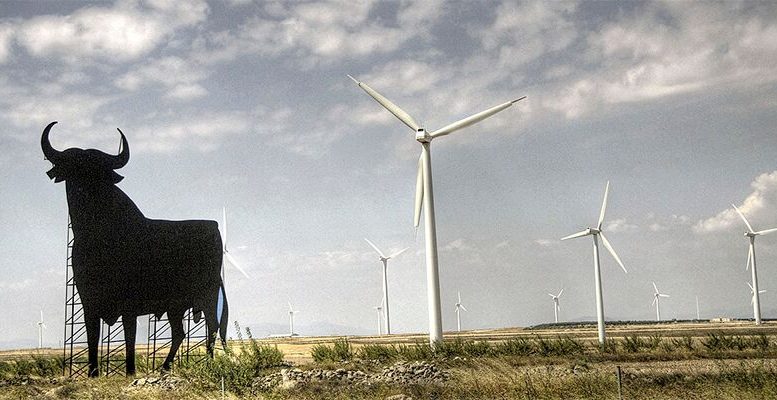 Why are we not getting any benefit from all that energy we are able to produce and which we are not using? Spain has one of the biggest renewables infrastructures in Europe, particularly as far as wind energy output is concerned. In fact we have the capacity to produce much more electric energy than we can consume. On average we use 35,000 megawats and have 100,000 installed.

With all that, we still pay much more for our electricity than our European partners: in January 2017, our energy bill was 35% higher than in January 2016 and we are paying almost double what Germany pays.

In Europe, 72% of energy consumption, almost three quarters, still comes from fossil fuels despite the efforts to shift demand towards renewables. In Spain, 73% of these sources of energy  are bought from overseas – according to Eurostat data from June 2016 – which reflects our country’s huge energy dependence, which has not stopped growing since 1995.

So there is no explanation as to why, despite this over-capacity, Spain received a large part of its gas from the US last winter. This was in part because it couldn’t get it from France, a country with which Spain has been struggling for some time to reach an agreement on energy interconnection which has never happened.

Part of the dilemma has to do with the lack of energy connection with the international markets. There is a big gap separating us from the rest of Europe. These countries have a 60% interconnection level compared with the Spanish market’s 3%. This gap explains to a great extent our dependence on overseas energy and the difficulty our sector has to find outlets for its production.

“We need a single energy market if we want to have competitive prices and ensure the free movement of energy,” says Maroš Šefčovič, deputy President of the European Commission and European Commissioner for Energy Union. Belonging to this single market has to be “Spain’s main objective,” Energy Minister  Álvaro Nadal has said, taking into account as well that we must focus on “producing the same amount of energy in compliance with environmental regulations.”

One of the important first steps towards achieving energy union is the need to continue to grow in renewables. “We have to develop and demonstrate how important it is for companies to advance in the area of clean technologies,” says Sefčovič. It’s also the sector which is creating the most jobs: in Spain, 60,000 people were working in the energy sector in 2014, an industry which generated revenues of 8 billion euros. And it’s expected that this sector will create 100,000 aditional jobs up to 2030, increasing its revenues to 12 billion euros.

In spite of Spain’s obvious connection deficiencies, the European Commission has complimented the sector’s potential in our country. “It’s a pioneer with experience in renewables. If we use all its potential, it would be very beneficial for the market, for Spain and for consumers,” Šefčovič says. He cites as an example of this special potential for developing the green energies industry the recent approval of merger between Gamesa and Siemens which will create the biggest wind turbine manufacturer in the world. “We need world champions like this, a clear example of the quality of innovation in types of energy which are increasingly more in demand.”