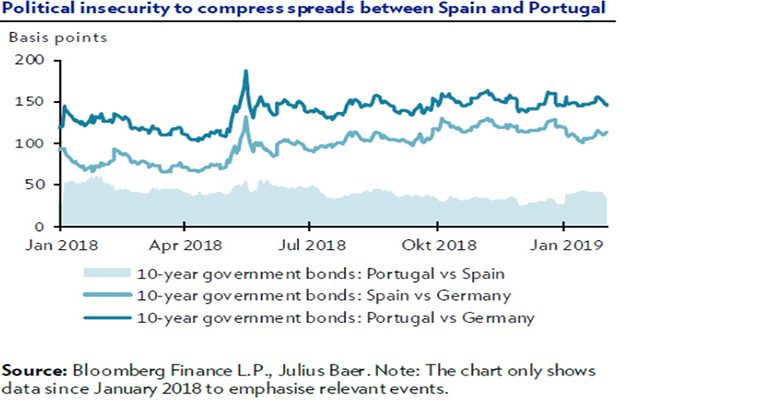 Bond spreads between Spain and Portugal

After Spain’s parliament rejected the budget for 2019 a couple of weeks ago, Pedro Sánchez announced snap elections for 28 April, one month ahead of both European Parliament elections and Spanish municipal and regional elections. As reported by analysts at Julius Baer, “polls are indicating a hung parliament, but shifts in party policies could enable both a centre-left and a centre-right coalition government to be formed.”

A centre-right coalition among the People’s Party, Ciudadanos and right-wing VOX, which has recently entered the picture in Andalusia, is likely to be cautious on spending, but will seek further tax cuts and will also bring the issue of Catalonian independence back for discussion. A centre-left coalition including PSOE (Spanish Socialist Workers’ Party) and Podemos is likely to increase social spending, which would not be perceived positively by markets, as budget deficits would increase. Growth in Spain remains strong and the country can withstand some political instability. Any long-lasting political tensions, however, could be a source of concern for investors and rating agencies, as it could pose a threat to reform implementation and debt sustainability.

The spread difference between Portugal’s and Spain’s 10-year government bonds currently stands at 30 basis points. According to analysts from Julius Baer: