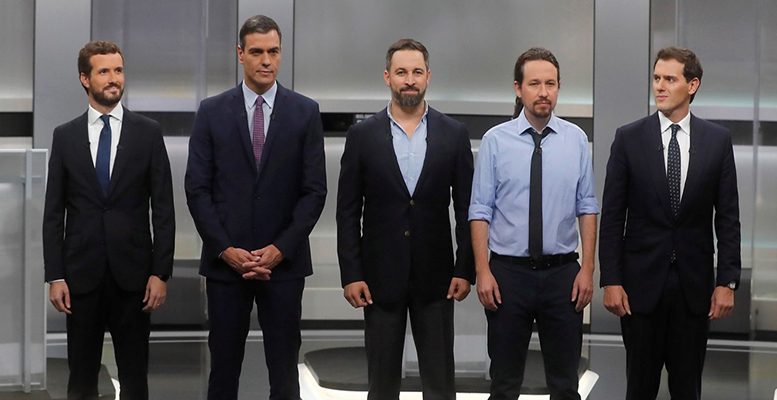 Fernando G. Urbaneja | The debate between the Spanish national political leaders (ranging from the far right to the far left) over two and half hours on Monday night, with a rigid format, and broadcast by various television and radio channels, was abrupt, with all attacking each other, many populist proposals, without inspiring or motivating ideas for the voters and without clear indications about possible alliances which could unblock the political impasse after Sunday´s vote.

The deployment of populism (especially by the extremist parties) and insufficiently costed electoral offers by the parties in between increase the uncertainties. The emergence of a populist far right with a robust agenda on immigration, centralised government and anti-globalisation is relevant. The new party on the far right, equivalent to those in France Germany and Italy, brings something new to Spanish politics. Vox, the populist party of the right, has come to stay, will have a strong parliamentary presence and will voice opposition to any government that emerges, be it the socialists (probable) or the PP (less likely).

The three centrists parties (PP, Ciudadanos, PSOE) ratified their militant Europeanism, but disagreed about economics (more or less taxes) and territorial issues (more or less confrontation with separatism). The list of electoral promises deployed by all is terrifying in terms of costs. All promise (some more than others) public spending, some with cuts in taxes others with hypothetical increases for the rich or as a result of reducing tax evasion, which is easier to promise than deliver.

The absence of strong ideas or political offers that do not amount to sharing out subsidies or their equivalent is striking. The candidates do not stand out for their intellectual brilliance, bogged down in bar room clichés, with simple statements which do no stand up to critical analysis. The Catalan question smudges the understanding.

In short, two and a half hours of successive monologues, of brutal confrontation which shows that at the moment Spanish politics is defined by what some call “disordered thought”, much passion, much propagandistic preparation, but few ideas and convictions.