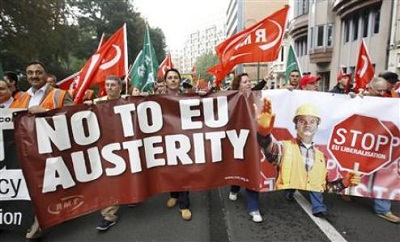 By Carlos Díaz Guell, in Madrid | No one in Spain is going to make it easy for the Rajoy government. Policy reforms and budget cuts undertaken by the cabinet, although considered timid and inadequate by many, will inevitably leave a number of victims in the ditches and they don’t seem willing to let this occur without doing anything against it.

The business sectors (most of them) affected by constrictions in public spending have began to draw their strategy movements as to shield themselves as much as possible from the cuts brought in by the new State budget.

For instance: even if Spain has a road network, at least the one that is included in the road network of the state, certainly enviable despite its known shortcomings, one of the first sectors to react in a somewhat truculent way has been the infrastructure maintenance one, the Spanish Highways Association (AEC). The AEC, led by Manuel María Muñoz, who for nearly a decade was managing director of the traffic department, has launched a full-frontal and successful press campaign to denounce the sorry situation of the road network. He says €5.5 billion is needed to keep the Spanish road network in perfect shape. An original manner to beg for taxpayers’ money? Not really.

Its advertising is grim, and has been carried out with the invaluable assistance of certain media outlets that have not hesitated to show minor bumps and gaps in highways or vertical signs attached to a cable: 325,000 vertical signs would be damaged, 50,000 kilometres of road markings should be repainted, metal barriers are damaged and up to 21% of street lights are off.

Blackmail is served and the note carries a resounding threat: if road accidents increase, the government is to blame.

The problem with this mindset is that everybody can play its part in the game, using the most emotional material the public feel sensible about and re-directing the painful budget cuts on to someone else. Surely the national health service system will be next to step in.

But the Spanish government should not be intimidated, nor should it succumb under electoral pressures. Cutting the waste is, in the end, the fair thing to do.