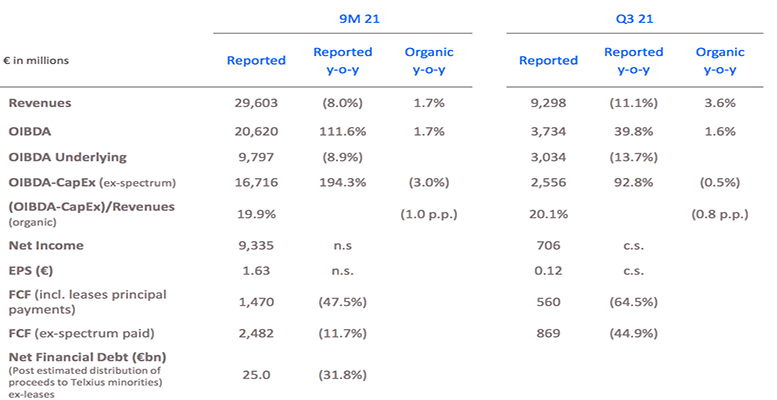 Telefónica has reported a record profit of 9.335 billion euros in the year to September – in the third quarter, on a like-for-like basis, profit was 706 million. The 9-months’ figures include the extraordinary results from the divestment of Telxius (around 3.5 billion euros) and the joint venture with Virgin Media in the UK (another 3 billion). These operations have also enabled the company to cut its debt by 31% year-on-year to 25 billion euros.

Revenues amounted to 29.603 billion euros in the first nine months, 8% less year-on-year, although in organic terms turnover increased by 1.7%. In the third quarter, revenues were 9.298 billion euros (-11%), largely due to the impact of divestments and the change of perimeter. By markets, Spain contributed 29% of revenues, Germany 18%, Brazil 16% and the UK 15%. Latin America as a whole accounts for another 19%.

The chairman of Telefónica, which has a workforce of 109,000 employees, reiterated that the strategic plan’s objectives and the commitment to the distribution of dividends planned for 2021 (€0.15 per share payable next December and another €0.15 per share in June 2022) will be maintained.

(Board to approve on November 24 a capital increase vs. reserves for its next €0.15/sh scrip dividend, rights expected to start trading on December 1st.)