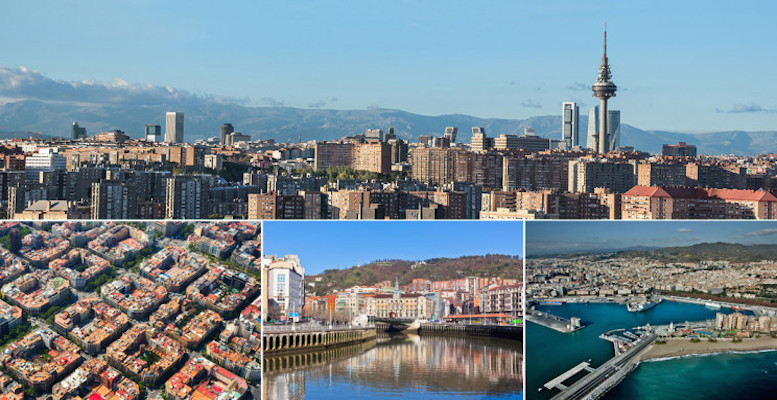 The coronavirus pandemic forced a high percentage of Spaniards to telework. Although this percentage has been declining as the social distancing measures have been lifted, many companies are already considering the option of offering their employees a more flexible way of working, combining days working face-to-face in the office with working remotely.

In view of this foreseeable rise in teleworking, in this article experts at CaixaBank Research will analyse its implications for urban mobility and, from a longer-term perspective, for the residential real estate market. After all, many families decide to buy a home near their workplace in order to minimise the time spent commuting. However, if the need to go to work in person is limited to just a few days a week, the decision on where to reside may change considerably.

In 2019, only 4.9% of employed people in Spain worked from home on a regular basis. However, taking into account the tasks carried out by workers in different professions, it is estimated that no less than a third of all Spanish employees could carry out their occupations remotely. In other words, there is a high potential to increase the number of people who telework.

But is this potential uniform across the whole of Spain or are there significant geographical differences? What we see is that the potential for teleworking is much higher in big cities, as shown in the first chart. If we classify Spanish municipalities according to their population density, we see that 39% of workers residing in large cities could telework, compared to 30% in intermediate urban areas and 23% in rural areas.

It is no surprise that large cities have greater teleworking potential, as this is where a very high percentage of «office» jobs with high teleworking potential are concentrated, in contrast to factory or farm jobs that are more common in intermediate urban or rural areas. However, what may come as a surprise is the considerable difference between the two percentages: nearly 20 percentage points between large cities and rural areas.

If we conduct the same exercise at the regional (autonomous community) level, we generally observe the same distribution: a higher percentage of teleworking potential in urban areas than in rural areas. This list is topped by the Community of Madrid, which far exceeds the Spanish average, with a teleworking potential percentage in large cities of 45%. The location of numerous corporate headquarters, the concentration of universities and the percentage of civil servants (above the national average) certainly explain much of this difference.

If teleworking becomes more prevalent, then the frequency with which workers will travel to their workplace will be reduced. In the short term, if we assume that workers do not change their place of residence, how many fewer daily commutes would we be talking about?

Recently, as a result of the COVID-19 outbreak, the National Statistics Institute of Spain has published highly-innovative mobility data based on mobile phone geolocation nformation. Although the data in question are not restricted to workers, they offer a good approximation for employees entering large Spanish cities. According to these figures, the 10 most populated cities in Spain receive just over 40,000 people per day on average. The ranking is led, naturally, by Madrid, with more than 100,000, followed by Barcelona, with more than 70,000. Bilbao is also high in the ranking, receiving some 34,000 people daily, which represents almost 10% of the city’s residents (see third chart).

How many of these journeys could be affected by the rise in teleworking? While it is difficult to answer this question accurately, the available data can give us an idea. Assuming that around 35% of all journeys into large cities take place for occupational reasons and that the teleworking potential of the workers undertaking these journeys is around 40% (a figure that corresponds to the teleworking potential in urban areas, of which approximately 5% already telework), then the daily movements into large cities could be reduced by 12.5%. However, since working from home is often combined with days spent working face-to-face, the reduction in travel may be less. For instance, if these people were to work from home 60% of the time, then urban mobility would be reduced by around 7%. This figure has significant implications for reducing congestion on roads into cities and for cutting pollution.

Beyond the short-term implications for urban mobility, if these changes in working habits are consolidated, they could lead a considerable number of people, many of whom currently live in large cities, to rethink their place of residence. For instance, home buyers of the future may be able to acquire the most expensive homes in cities for less, since a large portion of the usual buyers (highly-educated people who work in offices) could opt for housing further away from the city centre. In addition, the buyer of such a home on the outskirts of big cities will no doubt demand more square metres in order to accommodate one or home offices where they can spend part of their working day, and they will likely demand gardens and common areas given that part of their free time will be spent within the home itself, since it would be located in an area with fewer leisure and cultural activities on offer.

The rise in Google searches for the term «buy house» following the outbreak of the pandemic was indicative of a possible shift of trend in this vein, suggesting a rise in the appeal of owning a house rather than living in a flat. Thus, if teleworking ends up becoming the norm, the supply of residential housing will have to adapt to these new preferences in terms of location and type of housing. Urban planning schemes should also be reviewed to accommodate this increased demand for residential property, as well as for the related public services (schools, hospitals, etc.) and transport infrastructures.After all, these are transformations which could help to achieve a better territorial balance.

This does not mean that nobody wants to live in the city! Many jobs, such as those related to tourism or personal services, can hardly be carried out remotely. On the other hand, the preferences of households are highly varied and some people choose to live in the city not because of their work but because of the wide range of shopping, cultural and leisure activities on offer. Cities have also been, and will continue to be, focal points for development thanks to the significant synergies that take place within them in terms of the generation, dissemination and accumulation of knowledge. It is therefore unlikely that the rise in teleworking will reverse the secular trend towards greater urbanisation and population density in cities, but it could help to moderate it.