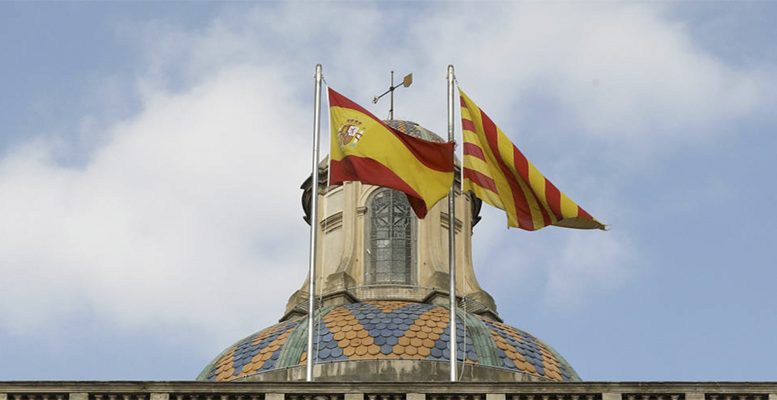 Spanish and Catalan flags in the Generalitat HQ

From 15:25 last Friday afternoon, when the Catalan Parliament made its unilateral declaration of independence, events have speeded up once more. Three hours after the solemn, but sad proclamation, the Republic of Catalonia disappeared into thin air. Mariano Rajoy’s central government dissolved the regional parliament and fired Carles Puigdemont’s government and all his “councillors” by implementing Article 155 of the Spanish Constitution in the Senate. And the biggest surprise: a call for elections on December 21.

Afterwards came the dismissals of those in charge of the Mossos de Esquadra, Catalonia’s regional police force.

Meanwhile, in the streets, the successionists celebrated the arrival of their new country until midnight. At the foot of the Catalan Parliament building, there were bands playing, Estelada flags flying and fireworks, with people probably expecting that the government of the new republic would appear on the balcony to greet the people, but there was no sign of them. On the other hand, however, the Spanish flag was still flying next to the Catalan one. And the following morning, on Saturday, it still stood out.

On Sunday, the streets were still crowded with people and flags. In this case, it was the other part of Catalonia, the one which has not acknowledged the new republic because it was born of an illegal and illegitimate process. It was chosen by a few, not by everyone, and was based on the destruction not just of the Spanish Constitution but also of Catalonia’s fundamental law, the Estatut.

A multitudinous demonstration, sprinkled with speeches from non-successionist Catalan politicians, from across the political spectrum (from the conservative PP and Ciudadanos to the left-wing, the more moderate socialists and the least moderate communists). They were celebrating the possibility that Catalonia may also be able to return to a legal framework and self-rule can be reinstated after the elections.

Today, Monday morning, Article 155 is still being implemented and Spain’s public prosecutor’s office has decided to file rebellion charges with the Supreme Court. This was initially expected, although the criminal proceedings will also be heard by the High Court. The consequences for the ex-Catalan government could even include prison sentences. In any event, nothing has been seen today of either ex-president Puigdemont or deputy president Junqueras…there is no graphic document showing they have actually turned up at their offices. Only one councillor, Josep Rull, in charge of Territorial matters, went to work. But one hour later, after a visit from the Mossos, he left.

Everything seems to point to the fact that the independent movement has abdicated from its aspirations for a new republic, at least for the time being. It looks like they are quickly focusing on arguments to explain to their followers that the proclamation of independence was “fake”, a farce. This is because an independent Catalonia is currently impossible. But they are also saying that they have to participate in elections which have been called by the Spanish government, not by the Catalan government. And these elections are not to decide on whether or not there is independence, but to form a new regional government which remains in Spain.

Without a doubt, this is difficult for them. Their public has followed them blindly and been faithful to the end. Now the shadow of betrayal is going to hang over their heads. Oriol Junqueras has already issued a timid, but unequivocal warning: “In the next few days decisions will need to be taken which will be difficult to understand.”

So the successionists are showing signs that they are accepting the reality. In the first place because they know that the punishments for the crime committed will be tough and they prefer to defuse the tension to try to make them less severe. And in the second place, because they cannot be excluded from the Catalan Parliament, despite what they have facing them. Four years exiled from Catalan politics?  They cannot afford it.

Article 155 of the Spanish Constitution has been much discussed due to the fact it allows for the intervention in a regional government, something unheard of in Spain since the country became a democracy. The territorial model of autonomous regions with self-rule has been considered one of the great achievements of the last 40 years. The intervention in Catalonia seemed like something of a sacrilege. That said, the article is nothing more than a tool which the Constitution provided itself with in 1978 to deal with situations like the current one: namely, the secession of one of the regions which make up the State.

This territorial crisis has fuelled the longest and most serious crisis in Spain’s democracry. A process which has been hatching for nearly 10 years, almost in parallel with the big global financial crisis. And it has got worse in stages, as major corruption cases in both Marid and Catalonia undermined the credibility of their leaders: the ruling central government party of Mariano Rajoy, as well as Carles Puigdemont’s Catalan party, which has ruled the regions  for the last 40 years.

In conclusion, some data which has emerged over the last few hours. The first polls for the Catalan elections on December 21 (published by the El Mundo daily) indicate the successionists would not win with an absolute majority. In the Spanish financial markets, the futures have revalued by more than 1%, reflecting the impact of the central government’s call for elections in Catalonia. The stock market opened up 1.6% on Monday and closed by rising 2.63%, the highest in last six months. The risk premium is around 112 basis points (it closed at 120 basis points on Friday).

But however things turn out, the social and economic damage has been done. It will all have to be put together again with care and affection, and with a lot of sense.