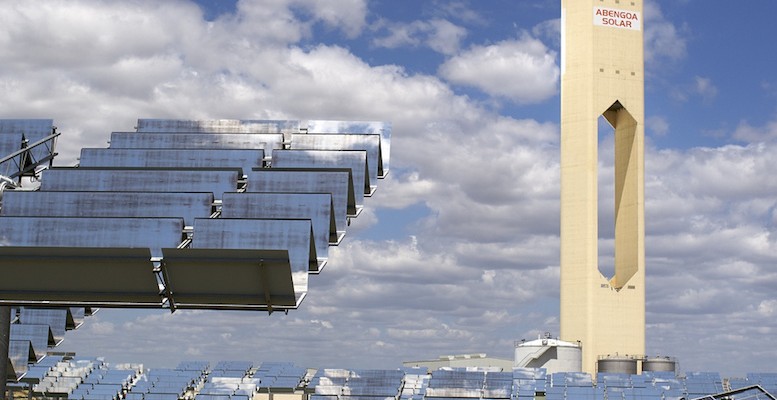 The global economy in general, and the Spanish economy in particular, are experiencing turbulent times. China, the emerging markets, raw materials, the weak recovery, inflation or exchange rates are entangled with the domestic problems of each individual country. In Spain, these are focused on a political map with a lot of question marks and a worrying level of private debt, which Abengoa’s crisis has accentuated.

Markets are not concerned by public or private debt, as long as they are sure it will be paid back. What does make them nervous is the Seville-based engineering and renewable energy firm’s non-payment in Ireland and Mexico. This has cast a shadow over the nearly 200 financial institutions which have a combined exposure to Abengoa of over 20 billion euros. The uncertainty increased following the breakdown in the agreement for Gonvarri to take a stake in the company.

According to the CNMV, the consolidated Abengoa group has liabilities of 25 billion euros. About 9 billion euros of this corresponds to bank debt and bond issues, and the expiry dates the are particularly demanding this year, according to Bloomberg data: 500 million euros in bonds and over 420 million in bank debt expire.

In the end, both the political uncertainty and that generated by Abengoa’s debt situation have been reasons enough to spark an over 8% loss in the Spanish stock market in 2015, compared with an over 13% increase in the Italian bourse.

So the warning from the IMF a few months ago is particularly valid. Namely that Spanish companies are weakened by their high debt levels. According to the international organisation, their capacity to deal with external shocks, as well as a rise in the financing costs or a drop in profits, is limited and also has important implications for the banking sector.

And so markets are on the alert and Spanish companies have begun to experience this level of insecurity. Look at ACS, which has once again taken up the sale of its affiliate Urbaser, after a failed attempt in 2008, to try to reduce its current net debt: over 3.7 billion euros.

Another company which is working hard to normalise its financial situation is FCC. Although it has yet to embark on its announced 708 million euros capital hike (the majority of which has been guaranteed by Carlos Slim), it has refinanced its affiliate Realia’s 800 million euros debt with its main creditors, Goldman Sachs, Fortress and Puffin, after obtaining a 9% acquittance. At the end of September, FCC had net debt of 5.718 billion euros. Now it is negotiating a 15% acquittance in one of the tranches of its future capital hike.

In conclusion, debt is one of the main constant concerns for Spanish companies, including the all-powerful Telefonica. The telecoms firm has prepared a plan B for reducing its debt in the event it comes up against serious problems with the sale of O2 in the UK. Telefonica’s net financial debt is nearly 50 billion euros.

The same could be said about another of the big companies – Iberdrola – which has seen its debt increase due to a negative exchange rate impact of 1.616 billion euros. In the period June 2014-June 2015, the electricity firm’s net debt rose by 519 million euros to 26.201 billion.

In a recent study by the Fundacion de las Cajas de Ahorros (Funcas), it was estimated that at the end of 2014, public, household and corporate debt totalled a combined 3.3 trillion euros, over three times Spain’s GDP. Corporate debt accounted for 108% of GDP in 2014, almost 300 billion euros less than six years previously.

Companies’ have a wide range of creditors, the most important of which are, in order: the banks, which are owed 531 billion euros; other companies, mainly via supplier credit (504 billion euros); creditors in the rest of the world (287 billion euros) and non-monetary financial institutions like investment or pension funds (104 billion euros).

It makes you dizzy!