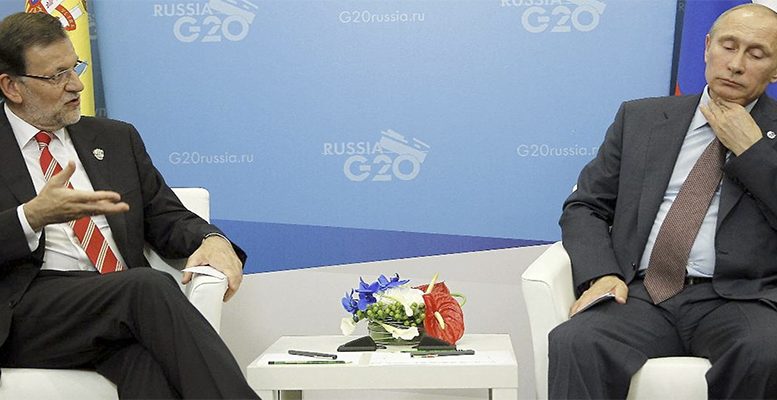 Xavier Colás (Moscow) | Russia is sick of being blamed for everything, but at the same time pleased that the world understands that, as happens with the US, they are aware of everything going on on the planet.

Brexit and Donald Trump’s arrival in the White House have weakened the Western bloc. Le Pen wasn’t successful, but Merkel’s bitter victory leaves the door open to new possibilities. And once again there’s a big political game being played out with a referendum: in Catalonia. Russia’s vice-chancellor Alexei Meshkov has assured that the solutions to the Catalan issue “should be decided within the framework of the Spanish constitution.” That said, Moscow has been financing international congresses for separatists in the western world for years via the Movement against the  Globalisation of Russia. Representatives of independent movements from across the world – including Catalans – last met a year ago in Moscow under the banner “Dialogue of the Nations”. The costs were partly met by the Russian government. The organiser was Alexander Ionov, a member of Rodina, a nationalist-biased party and ultraorthodox, founded by Russian deputy prime minister Dimitri Rogozin: “I have had contact with Catalan separatists and with the Generalitat over the last year, but I am not going to reveal their identities in case they are targeted,” Ionov replies when asked to what point he helped the “process”. Next spring there will be another separatists’ summit, the third in four years.

Newspapers like Le Monde, The Financial Times and El País have highlighted the alleged Russian interference. The Washington Post reported that Moscow “mobilised its media and social network robots in support of the separatists.” There is a joke going round in Moscow about the results of the referendum: independence, 47%; remain with Spain, 2%; United Russia (Putin’s party), 51%. What is true is that Catalonia and the UK celebrated two referendums, and Russia won both of them. Sergei Markov, a pro-Kremlin political commentator and ex-legislator of the ruling party, says that Moscow considers that interference would be “counter-productive”. Whatsmore, “the accusations from the US are already too much, Russia is literally being hounded,” he adds. Moscow sees the Catalan secession as another vehicle for dividing and weakening the West, but Spain is not its worst enemy within the EU. Greg Bikov, a Russian political analyst, believes that Moscow “is acting with caution, as a country which also has secessionist regions,” but at the same time with an air of revenge after receiving “lectures on human rights” for years.

Although there is a perception of aggression in the messages arriving from those Russian media conceived for the purpose of having influence abroad (RT or Sputnik), the reality is that there is something very different happening with the internal message: the Russian press has followed the Catalan crisis with moderation, although trying to bring the debate over to its country. Some Russian media compared the referendum with the vote which Russia orchestrated in the Crimea, occupied during its military annexation from the Ukranian peninsula in 2014. For Moscow, the acknowledgment of this referendum is a pending issue with Europe: there are few possibilities that this 2014 vote will be accepted, but the acknowledgement of Catalonia’s separation would facilitate a tacit acceptance of another previous done deal, namely the annexation of what was a Ukranian peninsula. If the separation of Kosovo justified the annexation of the Crimea in Moscow’s eyes, Catalonia’s independence would be confirmation that what was done in 2014 was correct.

Over the last few days, some Russian media has speculated that it was Brussels which “ordered” Madrid to carry out “repressive action” to stop the referendum in its tracks. They throw criticism at the EU on a daily basis, flagging the contrast between its “silence” about the violence in Spain and the reactions to the events in the Ukraine, where western leaders asked the pro-Russian government in Kiev in 2014 not to use force against the demonstrators. The fact they are taking advantage of the referendum is tangential.

The Guardia Civil has pinpointed a group of hackers located in Russia and its satellite countries as being responsable for having been permanently creating new links to the referendum pages in order to have so many copies of the vote on October 1 that it was impossible for the police to keep it closed down.

It happens that Ionov himself is the lawyer of two Russian hackers detained in Spain: the US is claiming that Piotr Levashov is allegedly implicated in the cyber-espionage during the electoral campaign which ended in Donald Trump’s victory. Levashov was detained in Barcelona in April, and another hacker, Stanislav Lisov, was accused of fraud.

The RT channel, which continues to accuse the Ukraine government of being a nest of nazis, broadcast some comments from an ultra-right Austrian leader, justifying the referendum in the Crimea and in Catalonia. The Russian government’s critics attribute the big influence of the FSB, the successor to the KGB, to Putin. They link it to the corruption, the arbitrariness of the legal system and the police, and the state’s control of the media. Putin himself was a director of the FSB at the end of the 1990s, but these black arts have not been used to their full potential with Catalonia.

“Spain is not on the radar, but is part of the EU and NATO. Any weakness in Spain is a weakness for the group of countries as a whole,” a European diplomat explains. For the moment, Russia sees the matter as an internal one, and the country’s television channels are focusing on the violence in Catalonia, without getting to the political issue itself. For the time being. Except if the problem stops being a domestic one and – for whatever reason- becomes an international one. Because Putin has a right of veto in the UN’s Security Council, this powerful forum where governments are urged to find a solution when it’s proven that they alone are not capable of doing that.