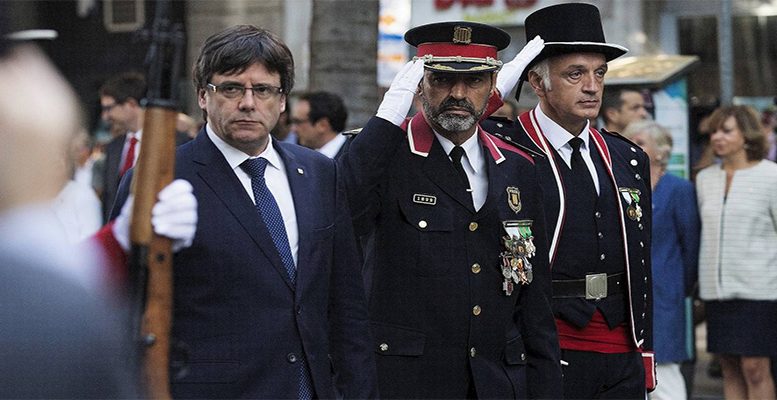 Josep Lluís Trapero, the Mayor of the Catalan police Mossos

Hay Derecho Joven Editors and Javier Cuairán García) | As expected, the decree of the judge sending Mr. Jordi Sànchez, president of the Assamblea Nacional Catalana (ANC), and Mr. Jordi Cuixart, president of the Ómnium Cultural, to preventive prison without bail has caused a huge stir. Some people say that the justice system is making “political prisoners” and others say that it is just a judge applying the text of the law in a dispassionate way. On the contrary, the decision of the Magistrate of the Central Court No. 3 of the National High Court, Mrs. Carmen Lamela, to grant provisional liberty without bail to Mr. Josep Lluís Trapero, the Mayor of the Mossos, and Mrs. Teresa Laplana, Intendant of the aforementioned body, has also raised passions.

The crime of sedition

The crime that is prosecuted in this case, as is well known, is sedition, which is regulated in articles 544 et seq. of the Criminal Code as an offence against public order. According to the aforementioned precept, sedition is committed by those who “without being included in the crime of rebellion, raise themselves publicly and tumultuously to prevent, by force or outside the legal channels, the application of the Laws or to any authority, official corporation or public official, the legitimate exercise of their functions or the fulfilment of their agreements, or administrative or judicial resolutions”.

Before going on to analyse the judicial decisions handed down on October 16th , 2017 by the Central Instruction Court No. 3, it is important to briefly anticipate what pre-trial detention is and how it is regulated in our legal system.

This is a precautionary measure and therefore provisional in time, consisting of the deprivation of liberty of the person under investigation, which, although generally decreed at a very early stage of the procedure, can be adopted during the entire process. As the reader can imagine, in a system that guarantees individual rights such as ours, the freedom of the person under investigation -whose innocence is presumed- is the general rule. Provisional detention must necessarily be the exception, since it is the most burdensome of all the cautionary measures that exist in our legal system. Therefore, the reasons a leading to the adoption of such a measure should be the extremely serious.

In our legal system, the precautionary measure of provisional detention is regulated in articles 502 et seq. of the Criminal Procedure Act. In particular, three conditions are required in order to adopt it (article 503): (i) firstly, the existence of one or more  actions that are punishable with a penalty of two years’ imprisonment or more; (ii) secondly, that sufficient grounds appear in the case to believe that the person against whom the order is to be issued is criminally responsible for the crime; (iii) finally, the precautionary measure must pursue one of the following aims: either to avoid the risk of leakage, or to conceal, alter or destroy relevant sources of evidence, or risk of reoffending.

As it has been said, we have two judicial decrees issued on the same date and occasion, by the same Magistrate and for the same facts, in which “there is no discussion” -always in terms of the evidence given the embryonic state of the investigation- about the criminal nature of the acts allegedly committed by the four persons under investigation, Mr. Sánchez, Mr. Cuixart, Mr. Trapero and Ms Laplana after “impeding the application of the legal system as a whole”, which is inferred from the account of facts common to both resolutions.

Although these two cases are more similar than different, it is also true that the Magistrate makes a distinction in their respective judgments with respect to the punitive consequences, considering the facts at this early stage of the investigation. While Mr. Sánchez and Mr. Cuixart were sentenced to prison without bail, the Magistrate decided in the case of the Mayor and the Supervisor of the Mossos, Mr. Trapero and Ms Laplana, to adopt other less burdensome provisional measures such as the appearance every fortnight before the judicial body, as well as the prohibition of leaving the national territory with the consequent withdrawal of the passport.

This disparity of both resolutions  finds its explanation in the following two points: (i) the degree of certainty about what happened is higher in the facts regarding Mr. Sánchez and Mr. Cuixart than in the case of Mr. Trapero and Ms Laplana; (ii)  the degree of participation is more intense also in the former than in the latter, at least in what has been proven to date after having taken statements from all the parties, having examined the content of the judicially intervened telephone communications and having observed the photographic reports in the reports issued by the Guardia Civil.

First of all, it should be pointed out that this is a procedure that limits the facts under investigation to the period between the 20th and 21st of September 2017, leaving aside any others facts of possible criminal appearance that have not been brought to the procedure.

With regard to the participation of Mr. Sánchez and Mr. Cuixart, the facts are summarized in their appeal for those days “not to a peaceful demonstration or rally, but for the” protection “of the Catalan Governors and Institutions, through mass citizen mobilizations, in front of places where police actions were being carried out“, specifically, entries and registers in various bhomes.

Thus, the decree states that “they were erected as interlocutors of the concentration, affirming that they could move the members of the concentration for their purposes“, being “aware that this would make it difficult for the police to act“, and then listing a series of episodes in which they actively participated, in order to move the “crowd” to act “against the judicially ordered actions“.

Especially eloquent of the seriousness of the events is the episode that relates that “due to the large number of people who were still on the street, the Judicial Commission formed by the Agents and the Interim Court Secretary remained besieged and held against their will inside the building, preventing the demonstrators from leaving through the front door of the building“, all this from 22:00 to 23:45 hours, “the time when the Interim Court Secretary of Justice could be evacuated through the theatre adjacent to the building, camouflaged and mixed between the audience leaving the theatre“.

On the other hand, regarding the participation of Mr. Trapero and Mrs. Laplana, the facts attributed to them refer to a passive attitude and inactivity facing what was being committed there. Thus, the Order refers to five specific orders issued by the Guardia Civil to the Intendant Mrs. Laplana, which tended to avoid or, at least, to lessen the mishaps of such concentrations, and for which she showed an open refusal to obey. The Order also blames Mr. Trapero for being late in complying with the court order of establishing a device that could allow the Interim Court Secretary and other officers without disturbances.

In light of the foregoing, both Orders enforce two first requirements of article 503 of the Criminal Procedure Act, as long as (i) the offense of sedition is punishable by up to ten years’ imprisonment, and (ii) there are evidences enough in the case to suggest that the four persons under investigation are responsible.

Nonetheless, the Magistrate argues that the criminal nature of the facts is not as clear-cut as they are to Mr. Sánchez and Mr. Cuixart, as long as the declaration of Mr Trapero and Mrs. Laplana “coincides with what the two lieutenants of the Guardia Civil and the lawyer of the Administration of Justice declared”, in stating “that they did not act against the concentrates because they considered that, given their volume, that could have generated a serious disturbance of public order without practical consequences”, and therefore understands that none of the premises of the first paragraph’s third point of article 503 of the Criminal Procedure Act were accomplished and they are necessary for pre-trial detention.

The possible plausibility of the Mossos’ statements, contrasted during the course of the pre-trial phase was, in short, what served the Magistrate of the Central Examining Court No. 3 to decouple -despite the seriousness of the facts- the procedural situation of the four investigated, unlike the proven actions against public order carried out by Mr. Sanchez and Mr. Cuixart. However, this Order concludes with a “without prejudice to the possible extensions” of the facts and of the subjects who may have intervened in them, which could cause the measures adopted to vary if events of a similar nature continue to occur.

Independence of the Judiciary

By the way, the political-social derivations, which, by their nature, are the subject of these proceedings, may lend themselves to certain interference outside the judiciary. Any proponents of democracy, the rule of law and one of the fundamental principles on which they are founded (the separation of powers) demand that the decisions of judicial bodies to be respected and to be kept separate from their “review”. Do not forget this: the Legislative and Executive branches are responsible for approving and modifying laws, the judges are responsible for interpreting and applying them. Let’s let everyone do their job.