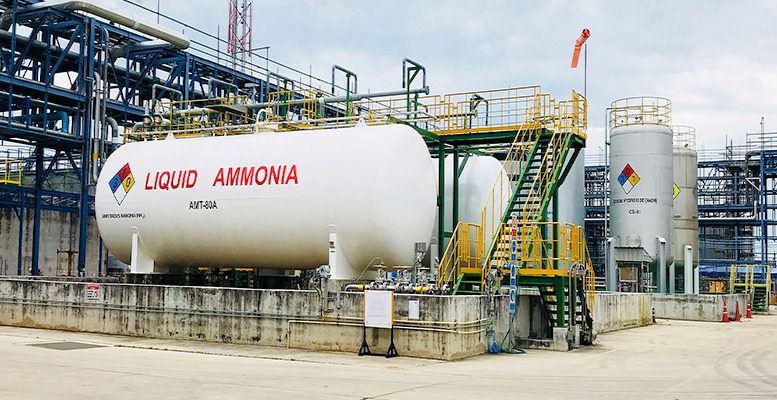 Mirabaud | Rising energy prices across Europe and globally raise many questions about the risks they imply for consumers, governments and central banks. However, the almost exponential increase in gas prices could, paradoxically, accelerate the adoption of “greener” energy, including ammonia, and thus be “good news”.

Europe is in the grip of a veritable “gas price crisis”, with each day bringing new record high energy prices. The increase has been blamed onlow gas storage levels, reduced supplies from Russia, demand from Asia, low renewable energy production and nuclear maintenance outages. Prices are expected to continue to rise in the coming months, with analysts predicting that the coming winter will be extremely harsh. That said, renewable energies that are considered more expensive could start to become more affordable. One of these is green ammonia.

b. Green ammonia to come into its own

When electricity needs to be produced, the cheapest energy sources are used first: wind, solar and hydro. If they are not available or do not provide enough capacity, more expensive energies are added, in the following order: lignite (low quality coal), nuclear, coal, gas and,finally,green ammonia.

You may ask, rightly, what green ammonia has to do with this list of energies. Scientists recently discovered a potentially revolutionary feature of ammonia by using it as an energy source. Some believe that the compound is well on its way to replacing fossil fuels in all their applications. Today, there is even talk of a future “ammonia economy”, in which ammonia would represent the “missing link” capable of making decarbonisation a reality and a good alternative to hydrogen,for example.

c. What is ammonia?

Ammonia (NH3) consists of nitrogen and hydrogen. Gaseous at standard temperature and pressure, it can be liquefied at -10°C, kept liquid at 10 bars or, preferably, in “cryo-compressed” form. All these processes are well controlled industrially.

Ammonia is heavier but denser than liquid hydrogen, i.e.,still 3.6 times more voluminous than a petroleum product (compared to 4.8 times more for liquid hydrogen). It can be used in some fuel cells or in the large diesel engines of today’s ships, with some modifications. Some believe that using ammonia as a fuel in its own right -without converting it into hydrogen -could be extremely efficient. With minor modifications, ammonia can be burned in conventional internal combustion engines and gas turbines, making it easy to roll out in the industrial sector.

d. There is grey ammonia and green ammonia

Today, the world cannot do without ammonia. Half of the world’s food production depends on it, as it is the key component of nitrogen fertilisers. It is also used to process animal feed. However, 5% of the natural gas produced globally is used to produce “grey”ammonia. Today, there is only one technically feasible alternative: to use green hydrogen (produced in a decarbonised way) to manufacture “green” ammonia.

In short, green ammonia is derived from renewable energy sources. Green ammonia production uses hydrogen from renewable energy sources instead of natural gas or coal and thus reduces greenhouse gas emissions. It is a renewable, carbon-free ammonia production process. The technical and technological difficulties in producing green ammonia should be solved. The most difficult problem today is green ammonia’s economic viability. It takes a lot of decarbonised electricity to produce green hydrogen and green ammonia and it is much more expensive than using natural gas. Decarbonised electricity prices will therefore have to continue to fall, and non-intermittent hydro, nuclear and geothermal generation will have to be available to power industrial facilities.

e.What are the characteristics of green ammonia?

Green ammonia has several characteristics, including

•Easier to liquefy than hydrogen: Hydrogenmust reach cryogenic temperatures below -253°C to be transported in liquid form. This process alone requiresenergy equivalent to one third of the total production of liquefied hydrogen. Ammonia, on the other hand, liquefies at -33°C and requires only a small amount of pressure to do so.

•Ease of transport: Unlike hydrogen, ammonia is already shipped worldwide in large quantities and many ports are already able to store and process it safely.

•Conversion using renewable energy: As Engie points out, converting ammonia into hydrogen normally requires large amounts of thermal energy from fossil fuels, which is paradoxical given the reason for using this compound. But in November 2020, researchers at Northwestern University announced thatthey had developed an efficient process to achieve this conversion using only renewable electricity.

•A ‘greener’ element: Ammonia does not emit carbon for one simple reason: it does not contain carbon. But that doesn’t mean it’s risk-free. Critics point out that burning ammonia can release nitrogen and nitrates, whose cycle is not as well researchedas that of carbon.

f. What growth for the theme?

The green ammonia market is expected to generate revenue of nearly $850 million by the end of 2028, from around $13 million in 2019, at a CAGR of 62.84% during the forecast period (2021-2028). Factors such as the growing concern about the environmental pollution caused by increasing greenhouse gas emissions from the production of ammonia from conventional fossil fuels isone of the major factors expected to drive market growth.

In addition, the increasing adoption of energy-efficient technologies for ammonia production is also expected to create numerous opportunities for market growth over the forecast period.

Ammonia has the considerable advantage of possessing an energy density nine times that of lithium-ion batteries and three times that of compressed hydrogen gas. This means that it is ideal for powering the engines of large ships. For the record, it is estimated that the sector is responsible for around 2% of global carbon emissions. Ammonia is one of the only zero-carbon fuels capable ofenabling players in the sector to sail. MAN Energy Solutions, a marine engine manufacturer, has announced that its first ammonia engine could be in service as early as 2022. Japan committed to using ammonia for shipping by the end of the decade and has even started burning it in its thermal power plants.

h. Who are the leaders in green ammonia?

Today, several major ammonia producers around the world have announced plans to produce hydrogen by electrolysis with decarbonised electricity and then green ammonia. The Norwegian group Yara,for example, one of the world’s largest producers of fertiliser and ammonia, has pilot projects in Australia, Norway and the Netherlands. By electrifying its ammonia production plant in Norway, Yara says it will be able to reduce its CO2emissions into the atmosphere by 800,000 tonnes per year. The US-based CF Industries, Spain’s Fertiberia and Iberdrola, the Asian Renewable Energy Hub and Australia’s Fortescue Metals Group have also launched projects.

Ammonia will not replace fossil fuels. But it is both an essential element for feeding the planet and a potential alternative fuel, especially for shipping. The current rise in the price of “conventional”energy will a utomatically make certain “green” fuels previously thought too expensive more affordable (also considering the indispensable state subsidies). Green ammonia is one of such fuel.