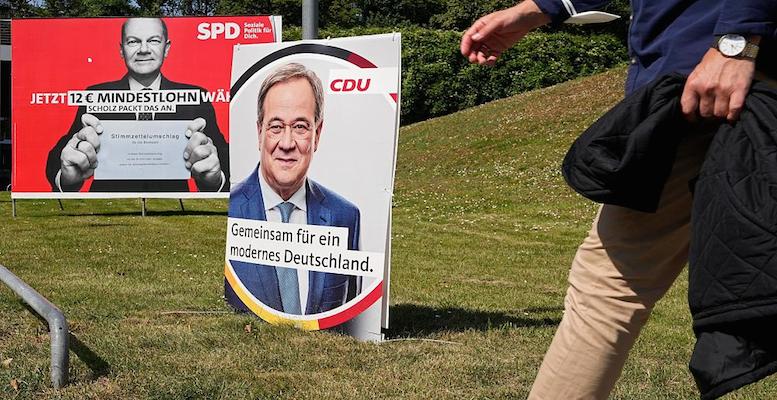 Azad Zangana (Schroders) | The Angela Merkel era is drawing to a close in German politics. 16 years as chancellor has brought stability and steady growth, but her departure now leaves a void that her Christian Democratic union (CDU) party has struggled to fill.

Today’s election is likely to be one of the most open contests in decades. Merkel’s replacement, Armin Laschet, as head of the CDU/CSU coalition (now branded the “Union”) has struggled to capture the imagination of the public, and the hearts of Merkel’s past supporters.

Voter intention polls have fluctuated significantly in recent months (chart 1). In late April, the Green party overtook the Union, only to see its rating fall back. Then in July, an unfortunate photo of Laschet smiling while visiting flood victims triggered a backlash, causing support to plunge by about nine percentage points.

As the polls currently stand, chancellor candidate and current Vice Chancellor and Minister of Finance, Olaf Scholz, is on track to replace Merkel as chancellor, assuming he can form a coalition government with a majority. The Union is now down in second place, the Greens (Grüne) in third, while the liberal right leaning Free Democratic Party (FDP) is just holding on to fourth place. It is worth mentioning that due to the pandemic many households are opting to vote by post, so these polls are being considered to be nearly as good as exit polls.

As with previous elections, the outlook for Germany will depend on the make-up of the next coalition government. However, a change from the centre-right Union led coalition to a centre-left  SPD-led coalition should see some movement along the political spectrum, with the degree of the shift determined by which partners enter the coalition.

There are three policy areas where we see room for greatest change.

Which parties could be part of the next government?

Chart 2 outlines the share of votes the likely coalition combinations would achieve according to recent polling, but also the preference of voters in parentheses. As illustrated in the chart, there are several possible scenarios that could occur.

Although an SPD and Union coalition government is still possible (with a switch of the current government leadership), this is unlikely to be a popular option. There was some resentment following the exclusion of other parties from the coalition following the last election in 2013 after the main two parties performed poorly.

Betting markets put the highest probability on an SPD-let coalition with the Greens and FDP. Many commentators speculate that the Union would rather go into opposition to rebuild rather than be a junior coalition partner.

If excluding the Union, the SPD needs to work with a combination of the Greens, FDP or LiNKE (Left) to form a working majority. Though a coalition with all three of the smaller parties is technically possible, it is highly unlikely. LiNKE is the most left-wing major party in German politics, and while it is not too far from the SPD’s views and policies, the gap with the FDP is too great.

At this point, it is worth mentioning that we would rule out any of the parties working with the Alternative for Germany party (AfD), despite it polling at over 10%. The AfD is too right wing, nationalist and populist for the other parties to work with it.

An SPD/Green/FDP coalition, often referred to as the traffic light coalition due to the party colours, is very likely to lead to higher public investment in infrastructure, and potentially a shift towards more progressive taxation. The FDP would probably resist the attempts to relax Germany’s tough fiscal rules, but it may need to compromise in order to take part in the next government.

An SPD/Green/LiNKE coalition would lead to an even bigger swing to the left, but this is the option that raises the biggest concerns for investors. Germany is considered to be the sentinel of fiscal prudence in the eurozone, and its public debt one of the most highly rated and coveted safe haven assets in the world of finance. The fear is that not only would fiscal mismanagement damage the reputation and the role of German government debt in global finance (which in itself could destabilise European sovereign debt markets), but could also hurt strong relationship between government and businesses in Germany – possibly initiating the exodus of capital from Germany’s  Mittelstand.

Can the Union still play a role?

In our view, in the same way that Merkel has asked other coalition partners in the past to be pragmatic and play their role as juniors in government, there is still a good chance the Union follows the same path. If the Union truly wants to defend its past policies, then it should seek to be part of the next government.

As mentioned earlier, a coalition with the SPD alone could prove unpopular, so bringing in the Greens or FDP makes sense (the Union is unlikely to work with LiNKE). Either coalition would work well, but with the FDP being to the right of the Union on the political spectrum, the SPD may prefer a more centrist party like the Greens.

The Greens largely campaign on environmental issues, which receives a lot of support. However, when the Greens discuss fiscal policy and social justice, they tend to lose a lot of support due to their more interventionist idealistic stance. German voters remain very conservative when it comes to fiscal policy. In a coalition with the SPD and Union, the Greens could be allowed to lead on environmental policy, while the SPD and Union take care of the rest.

This is a major milestone election for Germany, and many will be keeping a close eye on the outcome. For investors, this will be one of the less eventful elections in the region, but there are some potential outcomes that could frighten markets. A very left leaning coalition that includes LiNKE is the main concern, but other more market-friendly options appear more likely.

If the polls are correct, we expect to see fiscal policy become more expansionary over the coming years, with greater investment in public services and infrastructure. We also expect to see a softening in the relationship with Europe, and greater openness towards EU integration.

In any case, though we should see the results soon, negotiations to form the next coalition are likely to take several months given the potential wide range of combinations on offer. The new chancellor may not be inaugurated before 2022.