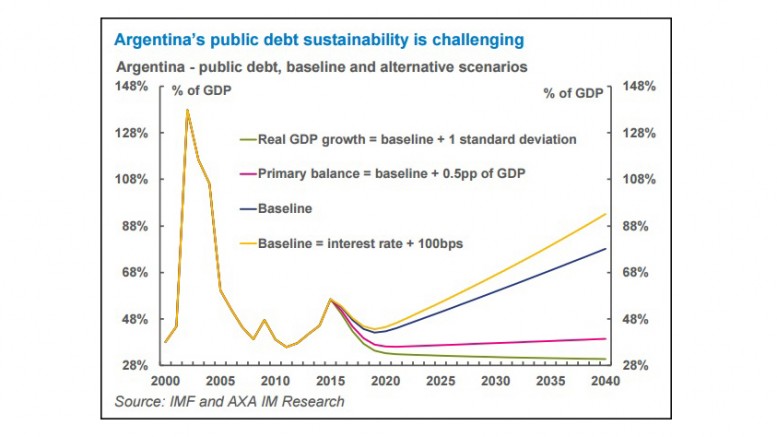 AXA IM | Argentina’s 200-year history is rich in sovereign debt defaults. The sovereign issued its first bond in 1824 with a maturity of 22 years, but it defaulted four years after issuance. Resolving that default took almost thirty years. Since then, the sovereign defaulted seven more times, most recently in 2001 and 2014.

The latter is the strangest default of all as Argentina could not simultaneously pay the holdout1 and the non-holdout creditors.

Fast forward to the present, a new President assumed office at end-2015, Mauricio Macri from centre-right. In less than half a year, he succeeded where former Argentinean presidents, deliberately or not, had failed: to negotiate with the holdout creditors, find a solution and acknowledge the jurisdiction of US courts as Argentina’s government bonds, restructured and un-restructured, were issued under US law. In this way, Argentina regained some of its lost credibility after becoming a legal and financial pariah in the developed world.

The Republic of Argentina has now issued sovereign debt totalling US$16bn, of which US$10-12.5bn will be used to pay the 90% of the holdouts with whom it reached an agreement. The remainder will finance its budget deficit, running at around 6% of GDP. The purpose of this note is to examine whether Argentina will return to international capital markets on a more permanent basis rather a one-off occasion.

A century ago, Argentina had the fifth largest economy in the world. However, bad policies and institutional weaknesses triggered a series of defaults and currency devaluations, resulting in double-digit inflation prints. The country decided in the 1990s to peg its currency (the Argentinean peso, ARS) to the US$. Inflation declined and foreign capital flocked to the economy. Pegging the currency made fiscal policy the only countercyclical economic policy. European currencies and the Brazilian real dropped significantly in 1998 due to the Asian crisis, which battered Argentina’s international competitiveness. The ARS had to depreciate, but it could not as it was pegged to the dollar. Fiscal policy had to be used to initiate an internal devaluation and improve competitiveness. Fiscal policy turned more restrictive by raising taxes and cutting budgetary outlays.

By 2001, the unemployment rate shot up to 20% and inflation to 26%. High inflation increased the demand for dollar liquidity and resulted in the currency peg being dropped. Argentina defaulted and devalued the currency. The ARS had depreciated by 70% against the dollar a year after the peg was dropped, well above the average depreciation a year after other foreign exchange rate crises. Argentina defaulted on US$95bn of its debt in 2001. In 2005 and 2010, it offered to pay 35 cents on the dollar to debt holders in a bond exchange.

Almost all defaulted bond holders participated in the debt exchange, whereas 7% of the defaulted bond holders (mostly hedge funds that had bought cheaply) opted out. Holdout creditors took Argentina to US courts and asked for the exchanged and non-exchanged bond holders to be treated equally and be paid simultaneously, as the pari passu principle dictates. After a 12-year judicial marathon, a New York court ruled in 2014 that holdouts were right and that any financial institution that helped Argentina to pay the exchanged bonds would be in contempt.

The Rights Upon Future Offers clauses embedded in the exchanged bonds further restricted Argentina to pay more to holdouts than the non-holdouts. Argentina could not pay anybody and defaulted again. Macri’s administration made a public offer in February 2016 to pay US$6.5bn to settle US$9bn in holdout claims, with additional options for bondholders whose cases were subject to US court rulings. Subsequently, US courts decided to lift the injunctions barring Argentina from paying its creditors.