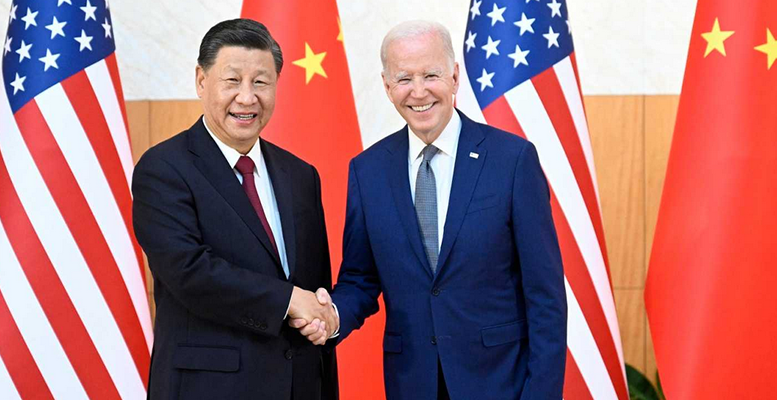 Alicia García Herrero * (Natixis) | It is hard to imagine a more momentous meeting than the one Presidents Joe Biden and Xi Jinping just held on the sidelines of the Group of Twenty meeting in Bali. Russian President Vladimir Putin’s absence certainly made things easier, as it opened the door for the G20 communiqué to address the Ukraine war, but it is not going to go beyond a compromise solution because China is acting as a bastion of Russian interests. In fact, Biden has made it easy for Putin because the Ukraine war does not seem to have been the focus of his meeting with Xi, but rather Taiwan. This fact in itself should raise alarm bells for Europeans about what really matters to the US. Indeed, even if Biden’s Democratic Party narrowly managed to hold control of the Senate in the US midterm elections, this does not mean that US support for Ukraine will continue unchanged. In fact, US support for Ukraine becomes much more complicated with a Republican-held House of Representatives, which undoubtedly weakens Biden’s position vis-à-vis Xi when it comes to the outcome of the Ukrainian war. Beyond the joint denunciation of the potential use of nuclear weapons, which Xi had already promised German Chancellor Olof Scholz during his recent trip to Beijing, the Ukraine issue does not seem to have been the subject of much more in the Biden-Xi meeting.

Instead, what has become clear to the world is that Taiwan has become the flashpoint in the strategic competition between the US and China. Indeed, the most important objective of the meeting between Biden and Xi was to dampen the tension in the Taiwan Strait that has increased in recent years, especially since the visit of US House Speaker Nancy Pelosi in August. Some important messages can be distilled from the communiqués from both sides following the meeting between Biden and Xi. Beginning with the positive, President Xi has been much more condescending compared with his statements at the Communist Party Congress and on a more recent visit to the National Military Commission. In particular, Xi appears to have assured Biden that China has no intention of wresting global leadership from the US or of engaging in military conflict over Taiwan in the short term. These signs of détente are undoubtedly good news for the world, but the key question is to understand what lies behind them.

The most plausible explanation is that Xi wanted to lay the groundwork for Biden to accept China’s red lines on Taiwan more favorably. For China those red lines have never changed, and it is the US that has moved away from its historic position, known as the “one China policy.” It is true that Biden, on no fewer than four occasions, has reiterated that the US will support Taiwan should China decide to attack the island. On the other hand, it is also true that the white paper that China released after Nancy Pelosi’s visit to Taiwan modified the proposals of previous white papers published by Beijing regarding Taiwan’s reunification with the mainland. More specifically, the solution China proposed in the white paper was less generous in terms of the areas that China would delegate to the Taiwanese authorities. In that sense, China seems to have learned from the Hong Kong case and wants to avoid problems with a “one country, two systems” model that leaves too much room for self-rule.

In other words, not only is China’s approach to Taiwan reunification changing, adapting to new circumstances in a world dominated by strategic competition between the US and China, but also its red lines on Taiwan are shifting. Indeed, the Chinese government’s reaction to any official or semi-official visit to Taiwan has never been harsher, and there is no prospect of this changing.

In short, what seems to have come out of the meeting between Biden and Xi is that neither seems very willing to engage in a military conflict over Taiwan, at least in the short term, which is great news for the world. On the other hand, Xi may have gotten a lot in return for this promise to avoid a military conflict and for not wanting to take global leadership away from the US. In particular, Xi could have obtained the approval, probably implicit, of red lines that, in practice, further tighten the siege on Taiwan, further isolating the island.

Given this situation, it seems important to ask a number of questions. The first is how much Biden is aware of Xi’s Taiwan strategy, that is, to appease the US while tightening the circle. In that sense, and linking back to Ukraine, Biden has not obtained any bargaining chips from China on what might be a tougher stance toward Russia, beyond the extreme case of nuclear-weapons use. Thus, while the meeting between Biden and Xi was undoubtedly important and surely helps to reduce the tension in US-China relations, at least temporarily, it did not seem to offer solutions to the two most pressing problems for the international order, namely the war in Ukraine and tensions in the Taiwan Strait. In sum, while it is true that the resumption of face-to-face dialogue between the two leaders is excellent news for the world, the fruits of this dialogue are scarce and, in Biden’s favor, practically non-existent, which is not going to be an easy political message for Biden once he returns to the US.