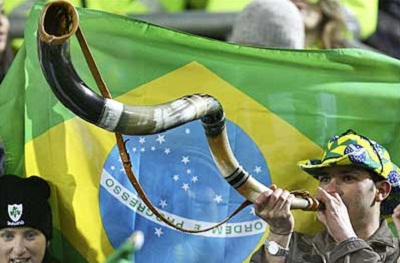 By CaixaBank research team, in Barcelona | Of the events occurring recently on the world economic scene, three have significantly affected the current fate of Brazil's economy. On the one hand, the confirmation of China's economic slowdown in the first quarter; on the other, the progress made in correcting commodities markets and, lastly, more intense tensions in the euro area's debt markets are causing a marked upswing in global aversion to risk.

We hardly need mention that China's slowdown and the lukewarm commodities markets are having a significant effect on Brazil's economic activity as they reduce its main foreign market. This would explain, in part, the disappointing growth rate of the Brazilian economy this year so far, as can be seen by leading macroeconomic indicators. Just a few days before the official data from the national accounts confirm this, the latest figure given for the monthly activity index suggests that gross domestic product (GDP) will have fallen by 0.35% in March compared with February, limiting year-on-year growth for the first quarter to little more than 1%, in line with the figure posted in the last quarter of 2011.

These figures, together with the persistent decline in industrial production and the perceptible weakening of employment reveal a clear moderation in Brazil's rate of economic growth. A greater moderation than expected, particularly taking into account the marked expansionary tone of economic policies since last autumn, leading Brazil's own Central Bank to revise d

ownwards its growth forecasts for 2012. Given these circumstances, the Brazilian economic authorities have reacted quickly and have already announced a new package of fiscal stimuli to support demand. This package includes both tax cuts (on financial transactions and vehicle purchases) as well as credit facilities for corporate investment in capital goods and for purchasing automobiles. For its part, the central bank has also hinted that the tax cuts might continue for longer than expected, so that we do not rule out the SELIC rate going below 8% this year.

With regard to exposure to the European turbulences, the real is still one of the most vulnerable currencies to upswings in global risk aversion and, since early May, has already depreciated more than 8% against the dollar and more than 4% against the euro. At the beginning, the authorities did not disapprove of this trend as they considered it to be beneficial for a manufacturing export sector that had been hard hit by the strong real of late. However, Brazil's Central Bank has just intervened, and forcefully, in the exchange markets in order to stop the local currency from depreciating to below the threshold of 2 reais/dollar, a level that seems to be proposed as a new minimal support.

Whether the current scenario of a slowdown and depreciation continues will largely depend on how long it takes to resolve the outbreak of tension regarding the euro area's debt crisis and whether this ends up reducing the confidence of economic agents in Brazil. In any case, we should expect Brazil's authorities to continue making use of stimuli but these might not bear fruit, at least in terms of growth, in 2012 but rather in 2013.