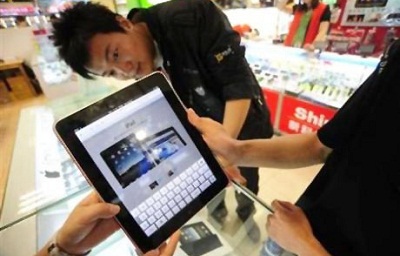 BEIJING | The launch of the new Ipad in China seems to be nearer now that Apple managed to get rid of the biggest barrier it was facing: the legal dispute with the Chinese company Proview. It seems Apple underestimated the fact that they were targeting a strategic market with a product named after a trademark that already existed in the country. For Proview, Ipad was just a name. But for Apple, the developer of the brand as consumers know it nowadays, it was the insignia of a revolutionary tablet that has changed the way people experience with technology.

Nevertheless, a name is a name, and Proview claimed Apple didn’t have the right to use it in China. It has been a protracted situation that kept both companies fighting for the ownership of the Ipad name in China. The sum of $60 million Apple paid to the bankrupt Proview would pave the way letting Apple to finally face its huge competitors: Lepads by Lenovo Group and Galaxy by Samsung Electronics.

Although Ipad owns more than a 70% of the market share in China, legal disputes over a trademark were hampering its dominant position. The article published by the official newspaper China Daily on the end of the legal dispute started by stressing that

“foreign companies must carry out due diligence before entering the market.”

Some experts quoted on the article seemed to remind Apple it hadn’t done its homework:

“They didn't do the contract well, they didn't negotiate this the right way.”

“Those are all lessons that should be known already.”

“If Apple, which is one of the world's largest multinationals, can make these kind of mistakes, that should really serve as an exampl

e for smaller, less experienced companies, including those from China, that they need to take great care in cross-border deals.”

“Apple would not have got into trouble if it had done due diligence.”

“They have to look forward in making brand strategies. Otherwise, they may face difficulties in seeking protection or end up paying large sums.”

The dispute was severely damaging, once again, the penetration of the Californian brand in the world’s second economy. The sale of the tablet was hampered in some cases, leading to a delay on the introduction of its new version.

Apple’s brand image suffered a set back not so long ago when it was accused of assembling its products in factories where labor conditions were very poor. The firm later agreed with its main manufacturer Foxconn to improve workers conditions by improving safety, putting an end to illegal overtime and improving the housing conditions of the workers. A move that was regarded, as well, as a lesson for foreign firms on the practices they need to review when doing businesses in China.

Apple is well positioned in China. Its sales in the country reached the $7.9 billion dollar in the second quarter of 2012. But Apple wants to keep growing, and regardless of whether Proview was right; the goal was to keep the machine going. The Wall Street Journal mentioned that the Chinese government might fear Apple’s case could refrain foreign companies from doing business in China, pushing for a quick settlement of the case.

Paying the sum of $60 million to a Proview who owes $400 million to its creditors seemed to be the option that would leave them all in peace. In a country where judicial transparency is poor, the issue lays on what if the bankrupt Proview was right and it just ended up trapped in a powerful dispute where bigger players’ interests were at stake.

1 Comment on "Who is paying the price of Apple’s entrance to the Chinese market?"