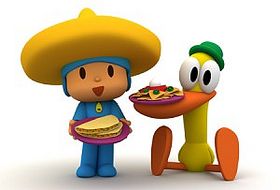 MADRID | Spain's Zinkia Entertainment signed a strategic agreement with the Mexican company Tycoon, by which it becomes the licensee agent of the Pocoyo brand for Central America, Colombia, Venezuela, Ecuador and Peru. The two companies have collaborated since 2008, when they set an accord on the distribution contract for the first season of the DVD series of Pocoyo in Central America.

The latest deal also includes an extensive list of products based on the famous children's cartoon character, such as toys, clothing, home accessories, childcare and nutrition, among others. Tycoon is specialised in marketing and trademark licensing and has a top-company catalogue with world wide-known products and team names like Angry Birds, Real Madrid, Hello Kitty or Naruto.

The general manager of  the company creator of Pocoyo,

with is listed on the Alternative Investment Market listed (MAB), Inigo Pastor, said that the agreement with Tycoon brings

“substantial support” to the presence of Pocoyo in Latin America, where the series is broadcast on the main TV channels with “excellent ratings.”