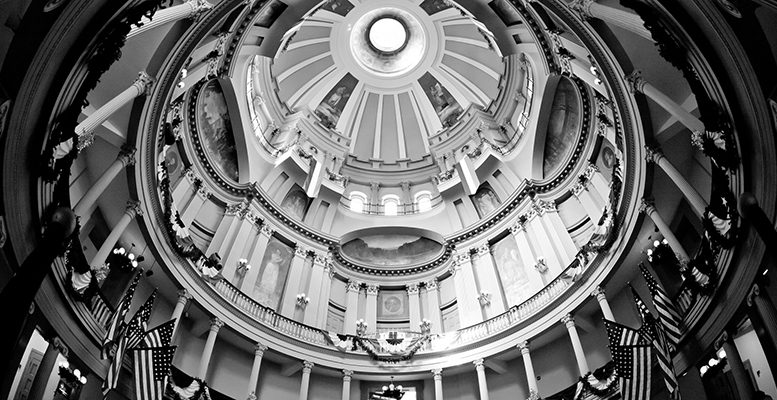 AXA IM | While the magic of Mario Draghi was being fully played out, the economic and financial outlook looks on an improving path to recovery in a post-crisis world. Clouds in this blue –but not entirely clear– sky may emerge from the political sphere. Popular dissatisfaction translating into ever more important populist parties could see storm clouds gather on the horizon. This month, we venture into the post-crisis regime for central banks across developed markets (DM), which we believe will lift rates gently, and argue that forthcoming political events (US elections, Brexit negotiations, Italian referendum) are the main risks into year-end.

We start by looking at the US where the polls remain too close to entirely discount a Trump outcome. Our research shows that if a President Trump limited himself to fiscal stimulus of the large magnitude he suggested during his campaign, this would increase demand and GDP growth beyond consensus expectations. Such overheating would subsequently push inflation higher, triggering a rise of not only Fed rates, but more importantly, the whole yield curve. Is this a positive scenario for markets? Alas, it is unlikely that Trump only sticks to his fiscal promises, all the more so because a split Congress would limit his activity. The additional implementation of trade tariffs (where he would be less constrained than for fiscal policy), notwithstanding the immigration statement, would likely push the US economy and the rest of the world into a premature downturn. This, at the time the chairmanship of the Fed would come up for renewal (2018), with all the uncertainty that such changes create. In such an environment, while the Fed would likely have little room to cut rates it would need to recourse to QE, at the risk of backlash with a Trump administration which has threatened to limit the freedom of the Fed. And that would send yield curve back down.

Theresa May and members of the Conservative party have reawakened fears of a hard Brexit and a political quagmire with the BoE. The party conference saw Prime Minister (PM) May prioritise migration over trade access and included other ministers discussing moving beyond the EU Custom’s Union. With the UK recovery having failed to restore internal and external equilibrium (the UK current account deficit stands at 5% of GDP), the perspective of a hard Brexit has pushed sterling down and sparked a sell-off in gilts. While the impact of Brexit will only filter through to the real economy slowly, fears remain that sterling depreciation will push the economy into stagflation and gilt yield sparkle will leave the BoE little room for manoeuvre, particularly as bond buying remains strongly criticised by some conservative politicians. Yet, the BoE is sufficiently independent to waive political discord and replace disappearing foreign buyers of gilts to address any bond buyer strike. However, this would further destabilise the UK economy. Hopefully, the Autumn Statement, due on 23 November, may address some of these concerns with fiscal support (albeit limited due to the large budget deficit and debt). It is unlikely, however, to compensate for the uncertainty created by Brexit: the UK economy runs the risk of a slow illness by foreign investment strike.

As polls get uncomfortably close for PM Renzi’s referendum on the Constitution, political reasoning has recently taken over with the PM distancing himself from the outcome. This is all the wiser as a smooth recapitalisation of some Italian banks partly depends on a stable political environment and confidence that Italy can continue to progress with reforms. We evaluate a less than 15% the chance of a “bad” outcome as follows: a “bad outcome” would see a series of events begin with the “no” vote winning, leading to PM Renzi’s resignation, his inability to constitute a new government, the constitutional court endorsing the Italicum (that gives a strong majority to the party winning any election), and new elections bringing the Five Star Movement into power. This would be a series of unfortunate events to which we do not subscribe. Chances are that, in case of a “no” vote, PM Renzi either does not resign or is charged by the President to form a new coalition. This would leave Italy in its current state, albeit with the unpleasant feature that reform would be difficult to lead… for a country with zero productivity growth and a high level of debt. This cannot be a stable situation.

Within such an environment charged with risks and uncertainty, we favour a cautious asset allocation: all assets look richly priced to us, at a time central banks pretend to slowly withdraw some support. Given central banks may appear more hawkish than markets expect while inflation recovers, given markets seem to price higher growth than what economies look set to deliver, we fear core rates will rise further than the moves observed recently and favour credit over equities. In our new version of Monthly Investment Strategy, we provide a tactical (3-month) as well as a more strategic view. Tactically, we are more comfortable taking risks in the credit and emerging market (EM) space than equities. We also observe that positioning has started to turn more bearish and look for a modest correction in core rates. Looking across regions, we prefer the US over euro area equities, even with the cost of $ hedging, EM over Japanese equities, and Asia remains our favourite in EM.

To conclude, central banks remain the key players in town with a non-concerted effort to turn towards rate normalisation, albeit at snail pace, continuing their immense task of restoring economies towards pre-crisis state. Politics however has deteriorated in the meantime and threaten this fragile recovery. Markets could be en route for a more volatile ride.