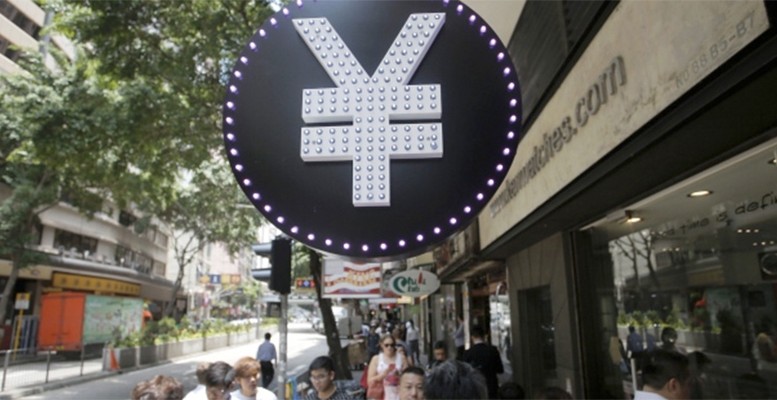 Li Yuqian and Yang Gang via Caixin | The offshore yuan market in Hong Kong has been shaken to the core by weeks of volatility that analysts blame on strong intervention by China’s central bank. Wild fluctuations for yuan-based interbank lending rates as well as onshore-offshore yuan spreads in Hong Kong began in January and could continue indefinitely while the People’s Bank of China defends its currency against short sellers.

The bank’s commitment to stabilizing the yuan’s value on offshore markets, of which Hong Kong is the oldest and largest, has “substantially raised the cost of short selling the currency” since the beginning of the year, said Yang Yuting, a senior economist with the Hong Kong arm of Australia and New Zealand Banking Group Ltd.

The Hong Kong Inter-bank Offered Rate (Hibor) – an interest rate banks pay for overnight borrowing from each other – hit record highs and reflected what Yang called “an extreme dry spell” for yuan liquidity in the former British colony.

The overnight Hibor for yuan loans jumped from what was already an unusually elevated 13.4 percent on January 11 to a record 66.8 percent the next day, before cooling off to its usual single-digit levels.

Interest rates for seven- and 14-day yuan loans between banks in Hong Kong also soared to unprecedented heights in January.

Meanwhile, the difference between the yuan’s onshore and offshore exchange rates widened to more 1,300 basis points on January 6, compared to an average of about 700 in December and 300 basis points in November, making offshore yuan significantly cheaper than its mainland equivalent.

By mid-January, though, central bank measures had triggered a reversal, leaving yuan traded in Hong Kong relative to the U.S. dollar briefly more expensive than on the mainland’s interbank foreign exchange market.

Yang said January was likely just the beginning for a period of powerful policy intervention by Beijing.

“The central bank has plenty of ammunition to carry out intervention,” he said. “Any small steps it takes will make waves in Hong Kong’s forex market.”

Hong Kong investors of all stripes would do well to prepare for continued volatility for the city’s offshore yuan market through 2016, Charles Li, chief executive of the Hong Kong Exchanges and Clearing Ltd., said in a blog posted on January 12.

And the yuan’s exchange rate against the U.S. dollar may fluctuate more than many expected, Li said. Fund managers, commercial investors and stock market players face a bumpy road ahead, he wrote, so “fasten your seat belt.”

About US$ 230 billion worth of yuan changed hands every day in 2014 on the world’s major offshore yuan centers, the central bank says. The figure for onshore yuan and forex trading was only US$ 55 billion.

Liang Hong, chief economist at the investment bank China International Capital Corp. (CICC), said the bigger offshore yuan markets grow, the stronger their influence and the more costly it can be for the central bank to exert a yuan-strengthening influence, if and when it chooses to intervene.

Prospects for an appreciating yuan attracted currency traders to offshore yuan markets last year. What the central bank may not want is for those same traders to sell large blocks of yuan ahead of an anticipated depreciation because countering those sell-offs reduces China’s foreign currency stockpile, and do so in ways that economists fear are bad for the country’s liquidity condition.

China’s reserves of foreign currencies shrank by about US$ 500 billion last year from a year earlier to US$ 3.3 trillion by the end of the year, said Jiang Chao, chief analyst at Haitong Securities. This is the first annual decline in more than two decades. Moreover, Chinese companies are saddled with US$ 1.53 trillion in foreign, mainly short-term, debts.

The yuan has indeed depreciated since August 11, when the central bank announced changes to how it calculates the yuan’s daily fixing, which state-run media calls the central parity rate. The new method, which officials said better reflects market value, links the daily rate to the currency’s closing price for the previous trading session.

The fixing is a reference the central bank provides to interbank forex market traders based on the perceived value of the yuan. It is a mid-point from which daily spot trading prices for the yuan are allowed to deviate by 2 percent in either direction.

The policy change set in motion a steady depreciation of the yuan against the U.S. dollar. China’s currency fell to almost 6.6 per dollar in January from 6.1162 on August 10, meaning it had lost more than 7 percent of its value against the dollar since last summer.

Some analysts argue that the central bank is letting the yuan lose value in order to boost Chinese exports. Others say the August action was part of a plan to win the yuan a place in the special drawing rights (SDR) currency basket managed by the International Monetary Fund (IMF). The yuan got a green light for SDR rights in December.

After the IMF’s decision, the central bank unveiled a new currency index that measures the yuan’s value against a basket of 13 currencies. The U.S. dollar was given the largest weight, at 26.4 percent, followed by the euro, yen and Hong Kong dollar.

The index was relatively stable in January, a sign that analysts said underscores progress on the part of the central bank in deciding the yuan’s value against the major currencies – not just the greenback – that China uses for foreign trade and investment.

Wang Tao, chief economist at UBS Group, said the central bank has become more tolerant of fluctuations in the yuan’s value against the U.S. dollar. Meanwhile, she said, the bank has more closely linked the values of the yuan and basket of 13 currencies. Those links are likely to strengthen throughout 2016.

While the central bank and analysts who back its policies have painted a rosy picture of the campaign to back the yuan, some analysts have warned of a negative impact over the long term. Nomura Securities researchers said in a recent report that the central bank’s intervention in Hong Kong’s currency market may upset the city’s banking sector along with the rest of its financial system.

BOC International, a securities firm, said in a January 12 report that central bank efforts to shore up the yuan by intensifying intervention and slapping more restrictions on capital account operations could bring chaos to the market. That’s because of what he calls foggy messages to investors and inconsistent policies made in an opaque manner.

The CICC’s Liang said the central bank intervention may be a net loss because it is detrimental to the development of offshore yuan centers in Hong Kong and elsewhere.

Starting in October and continuing into January, the central bank took several steps aimed at controlling the flow of yuan away from the mainland. One such measure restricted sales of bonds by foreign institutions on the Chinese interbank market. Another suspended the processing of new applications for yuan-denominated securities investments abroad.

Data from the Hong Kong government show the amount of yuan deposited in Hong Kong banks shrank 14 percent to 854 billion yuan in October from the June level, a decline that analysts blamed partly on the central bank interventions which reduced yuan supply.

In Hong Kong, the bank mopped up yuan liquidity by requiring that domestic banks freeze up to 17 percent of the deposits they received from banks in the city and other offshore yuan centers. Offshore banks deposit yuan funds with mainland lenders mainly because of a shortage of investable yuan assets outside China.

The bank reserve requirement, which took effect January 25, cut the amount of yuan available for lending in offshore markets. The effect was to push up borrowing costs and discourage short sellers, according to analysts from banks, securities firms and investment institutions.

Caixin learned from sources close to the central bank that it had also ordered commercial banks in China, which provide the yuan cash-pooling service for multinational corporations, to limit their clients’ outbound flows of the currency. Cash-pooling, which started on a trial basis in the Shanghai Free Trade Zone in 2014 and later expanded nationwide, lets multinationals move capital across borders among their invested holdings and affiliates with relative ease without violating China’s strict rules on capital flow.

The central bank’s instructions came in the form of “window guidance,” which lets the central bank give non-binding orders to financial institutions yet expects them to obey, a source said.

The central bank apparently feared that without this rule, companies would channel more yuan than necessary into overseas operations, said a banker who asked to remain anonymous.

This window guidance was an “obvious attempt to reduce yuan supplies among international speculators who were betting on a weaker yuan by increasing their costs” and preventing short selling, said an official at a regional branch of the central bank who asked not to be named. The net effect would be to help narrow the gap between the yuan’s onshore and offshore exchange rates, he said.

Xu Gao, chief economist at Everbright Securities, recommended the central bank strive to balance control of the yuan’s value against the need to encourage the yuan’s use overseas. Offshore yuan centers and anything else that encourages overseas use of the yuan, he said, would inevitably weaken the central government’s influence in forex markets.

Through the first seven months of 2015, Xu said, the yuan’s onshore and offshore exchange rates were equally sensitive to fluctuations in the other. But the central bank’s adjustments in August changed all that, as the offshore market started having a stronger influence over how the yuan was priced on the Chinese market.

RayFarris, head of macroeconomics strategy at Credit Suisse Asia, said clever investors found ways to predict the central parity rate for the yuan based on offshore market activity – something the central bank never wanted to happen.

“Losing the pricing power of yuan’s exchange rate to an offshore market is definitely not a good thing,” Xu said.