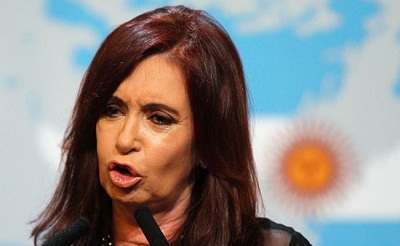 By Tania Suárez, in Madrid | President Cristina Kirchner may have got her way as she finally decided to expropriate Repsol’s YPF unit. The Argentine government confirmed the nationalisation of a 51% stake in YPF, because by decree it considered the oil firm’s activities of ‘public interest’.

Tuesday morning, the president of Repsol Antonio Brufau declared that this decision is

“illegitimate and unjustifiable, an act preceded by a campaign of harassment, of coercion and deliberate leaks.” He said that these ‘ploys’ by Cristina Kirchner have been “worked out in order to induce a drop in YPF price and to facilitate the expropriation at a rock-bottom price.” The president of Repsol also stated that “the expropriation is a way of covering the social crisis in Argentina.”

Brufau announced that Repsol is preparing a legal battle, and that they will sue Argentina before the International Centre for Settlement of Investment Disputes, which is the arbitration body of the World Bank. Repsol will claim compensation for damages amounting €8 billion, apart from other collateral effects still not quantified.

According to analysts at Bankia,

“the move by Argentina has broken the judicial security of investments in that country. That’s why the risk associated to the stakes and the activities that other companies have there, has been magnified.”

In the same vein, from Bankinter Broker they point out that

“[the break-up of the legal guarantees in Argentina] could jeopardise all investments made by other Spanish and non-Spanish companies in the country.” They added that “the most serious precedent of the present situation is the so called ‘Corralito’ (debt default) from 2002. This puts at risk, categorically, any external investment. However, the discrimination practised so far against Spanish companies leads to think that they will be the worst affected.”

Most experts drew attention in their reports to other Spanish companies that have exposure to Argentina. At Ahorro Corporación Financiera (ACF), they consider as among the most endangered ones Prosegur (with 18% of its sales in the country), BBVA and Santander (4% of their profits), DIA (7% of its sales and 3.7% EBITDA), and Telefónica (5.1% of its sales). Analysts agreed that the expropriation was taken for granted, so the share of Repsol hasn’t suffered that much. ACF said that

“after the initial ‘punishment’ against the share, this event could even be an opportunity; we expect a process of international arbitration that should favour Repsol”.

At Bankinter, the experts said that

“the impact is already assumed within the price, so the share shouldn’t fall any more. It should even rebound because there isn’t any uncertainties any longer, and because Repsol could receive the expropriation price or even a compensation.”