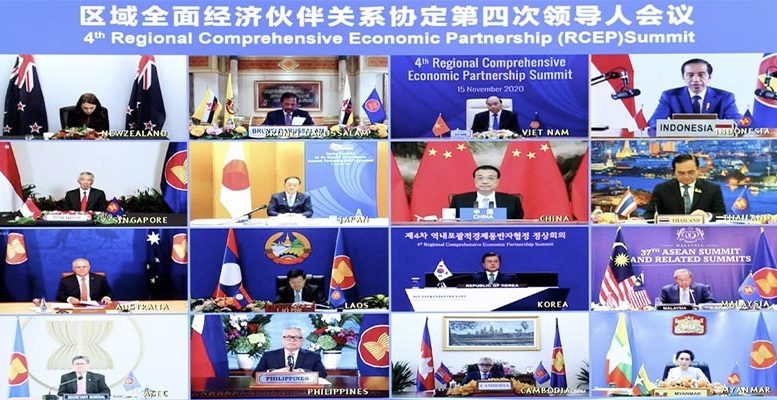 Jinyue Dong, BBVA Research ! On November 15th, Asia Pacific nations including China, Japan, South Korea, Australia and New Zealand plus 10 countries of ASEAN signed the world’s largest regional free-trade agreement which is the so-called Regional Comprehensive Economic Partnership or RCEP, with the member countries encompassing 2.2 billion people that is nearly a third of the world’s population and USD 26.2 trillion GDP as around 1/3 of the world GDP as well as 1/3 of world’s total trade volume. Top officials from 15 nations inked the RCEP nearly a decade in the making on the final day of the 37th ASEAN Summit hosted virtually by Vietnam this year. The completion of negotiations is a strong message affirming China, Eastern Asia and ASEAN’s role in supporting the multilateral trade system. In addition, the agreement will contribute to developing supply chains that have been disrupted due to the Covid-19 pandemic and the China-US decoupling, as well as supporting the regional and world economic recovery.

Obviously, the signing of RCEP which has experienced eight years of negotiations among member countries has essential implications on Chinese and regional economy:

First, by significantly reducing the tariffs and non-tariff barriers, RCEP will enhance the real economic linkages among the member countries and intensify the spill-over effect of China’s high economic growth to other regional economies through international trade, promoting post-Covid regional economic recovery. In particular, zero tariffs will cover around 90% of the goods trading among the members, and the openness of service trade and FDI will be significantly higher than the previous “10+1” free trade agreement. At the same time, what is new to RCEP is to include China-Japan and Japan-Korea free trade relationship, exceedingly promoting regional free trade. According to the estimation of Brookings Institute, RCEP will increase member countries’ trade by around 10.4% compared with the baseline level. As China is the only positive growth country among the main economies in the world this year, the RCEP will simulate the spill-over effect of China’s high growth to other regional countries by increasing their exports to China, significantly adding the new engine to the post-pandemic regional economic recovery.

Second, RCEP will strengthen the supply chain synchronization among the regional members that has been disrupted by the recent Covid-19 pandemic and China-US decoupling; in addition, it will speed up the labor-intensive sector’s supply chain relocation from China to ASEAN countries. Value chain relocation from China to ASEAN countries with lower labor costs has been a longstanding topic of discussion even before the COVID-19 pandemic and U.S.-China decoupling. As far back as the 2000s, some labor-intensive industries such as the textile sector have been transferring from China to ASEAN countries. (see our recent Economic Watch: China | De-Sinicization of Global Value Chain after COVID-19) Obviously, RCEP will speed up this kind of supply chain relocation in the most efficient way as the future supply chain distribution will be more driven by cost because RCEP significantly reduces trade tariffs. Beyond these, RCEP will also help to re-construct the regional supply chain and reduce the dependency on the US and EU markets.

Third, RCEP is China’s new strategy of multilateralism to deal with the ongoing China-US decoupling and the US unilateralism. The timing of signing RCEP which is prior to the US willingness of rejoin Trans-Pacific Partnership (TPP) after Biden won the US president election indicates that China is willing to play a leading role in Asian countries and would like to adopt the multilateralism (at least regional integration comes first) to deal with the

However, some caveats are indeed noteworthy for the long-term outlook of the RCEP: First of all, the signing of RCEP does not necessarily mean China could downplay the economic cooperation with the US and the EU. By contrast, the timing of the BIT together with the Sino-US economic relationship under Biden’s administration is still the most important issue for China. After all, no matter how integrated the Asian economy, most of the final goods’ destinations are the US and the EU, bring trade surplus to Asian countries, let alone the EU and US are the top two trade partners of China. Second, unlike the EU and North American Free Trade Area (NAFTA), economic integration in Asia has much more barriers, as members are at the very different economic development stage with totally different languages, institutional schemes and culture etc. Thus, there will be definitely a long way to go compared with economic integration level as of the EU and NAFTA.

Altogether, the RCEP is indeed a milestone for regional economic integration and post-pandemic economic recovery for member countries. In addition, it will strengthen the supply chain synchronization among the regional members that has been disrupted by the recent Covid-19 pandemic and China-US decoupling. To a certain extent, it displays China’s willingness to be a leading role in regional economy and a showcase of China’s multilateralism strategy in dealing with the US unilateralism. However, we need to also take into consideration of the long-lasting barriers that Asian countries have been facing for regional integration. At the same time, we have to admit that economic relations of China with the US and EU remain the most crucial part going forward.