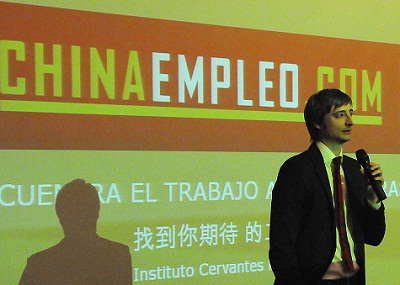 BEIJING | In a rather competitive environment like China, the Spanish CEO Pedro Fajardo managed to be the very first one in his field by identifying a  niche with a big market such the Spanish language. With 100% Spanish capital and without relying in external financial sources, he built Chinaempleo.com by using savings, bank lending as well as revenues from their site and advertising. In less than 2 years the site has grown and now has more than 150 companies from China and Spanish speaking companies relying on this online tool as a way to advertise their vacant positions and find new recruits. This visionary entrepreneur is now planning a great revolution: making of Chinaempleo.com the very first online network aimed at offering a platform for networking bridging the Chinese labor market and Spanish speaking countries.

What is Chinaempleo.com? Chinaempleo.com is the very first employment website that links China and Spanish speaking countries. The site is in both Chinese and Spanish. On the 15 of September of 2010, we started our online operations with a 100% Spanish capital. Nowadays more than 150 companies from China and Spanish speaking companies are registered, among which Telefónica, Airbus, Indra, Cola Cao or Mango. On the other hand, around 3,000 professionals have signed up onto the website. During this one year and a half, Chinaempleo.com had more than 251.590 visitors, 50% from China.

What took you to create Chinaempleo.com? I was dying to become an entrepreneur with a kind of business that helped making of the world a better place. It had to be something innovative. I wanted my company to be the very first one in offering a product no one else was offering. Once I got to China I realized how nice it could be to create a site like Chinaempleo.com

What brought you to spot such an innovative opportunity? The feeling that the Spanish speaking world was rather weak in global professional markets, specially the Internet. A fact coupled with the increasing trade relationship between China and Latin-American countries.

Chinaempleo.com is planning to develop into an online social network. In a country like China, what advantages  brought you the fact that the company is operating strictly online? How do you get yourself known in such a wide country while at the same time  keeping the number of visitors growing? Chinaempleo.com’s great revolution will be to evolve into the very first online social network aimed at doing networking within the Chinese labor market and Spanish Speaking countries. For this reason, we are taking a great effort in renewing the site in order to make of it something out of the ordinary.

It will count with specific tools that will be adapted to the current needs of both employers and potential employees. Chinaempleo.com’s great contribution is that it will also be useful as a networking tool to those professionals who are not actively seeking a position but who want to be in the market somehow.

The advantage of being an online site in a country like China is that it brings you the chance of reaching its professional market without the need of being physically there. In order to make ourselves known in such a difficult country, we developed a two way strategy: the online one, based in our effort of getting a better positioning  in search engines results; our presence in Chinese online social networks as well as through collaboration agreements with entities such Instituto Cervantes Pekín. On the other hand, we also have an offline strategy which consists of doing presentations of our website to companies and professionals that are looking for employment; organizing events in employment fairs, Universities, etc. On top of that, there is an unforgettable requirement: the site must be in Chinese.

It is often spoken about great investment opportunities in China, but what are the risks that this market entails for an innovative entrepreneur? The biggest risk is the ignorance in relation to the Chinese market itself: its pros and cons, its special features, and so on. The more familiar you are with the market you work in, the more the risks are decreased. A formula that can be applied to any market; and China is no exception.

As a Young entrepreneur, do you feel more comfortable in China than in Spain, even though in this Asian country there are greater difficulties? To be honest, I feel comfortable in this global world which is the Internet. Chinaempleo.com is a company that feels like belonging to the world, not to any country in particular.

Taking into account you entrepreneurial experience in China, which myths do you identify about the opportunities that bring this country? There is a great ignorance in relation to this market which results in myths and wrong ideas about China. I would recommend those who are keen on investing or working in China, to try to gain a good understanding of the country through as many sources of information as possible.

Employees: Pedro Fajardo works with four freelance contributors (three from Spain and one Chinese). An online manager and designer in China, two web programmers in Spain and an events organizer, translator, and social media manager in China

Clients: Telefónica, Airbus, Indra, Cola Cao and Mango, among others.

Entrepreneur’s background: Bachelor’s in Information Sciences at Cardenal Herrera CEU and Masters in International Marketing at ESCP Business School Paris Chamber of Commerce. He worked for 5 years in Madrid at several advertisement and marketing agencies such: Grupo Publicis, Grupo Aegis y M&C Saatchi. He has been in Beijing for 3 years working as a coordinator for the sales team of a Spanish industrial group while starting up Chinaempleo.com