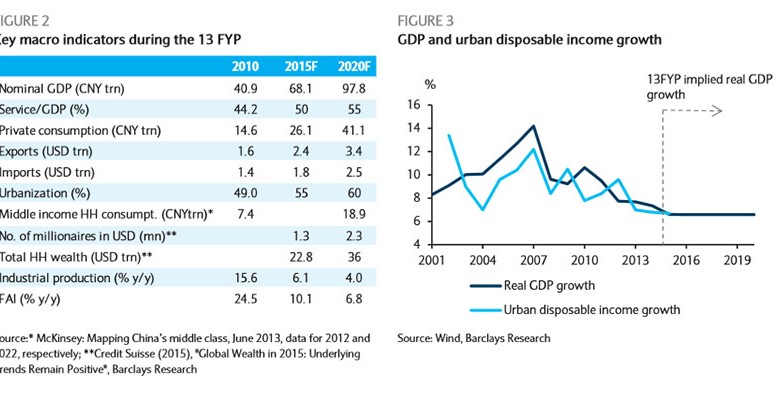 BARCLAYS | The 13th Five Year Plan (13FYP), the first to be produced under President Xi’s leadership, covers the period 2016 – 20. The draft 13FYP plan is being reviewed at the fifth plenary session of the 18 th Communist Party Central Committee (CPCCC) from yesterday to 29 October. Despite some recent policy ‘hiccups’, we believe that the Chinese government remains committed to further reform and opening up of the economy.

We believe growth, rebalancing, upgrading, liberalisation and the environment will be the major themes in the 13FYP, with 10 priority areas of development highlighted by President Xi for the next five years.

We also think around 6.5% growth will be the government’s official ‘bottom line’ during the 13FYP, though actual growth on the ground could be lower. A higher growth target could imply more gradual capacity cuts and lower growth for longer. In our view, the government’s strategy wi ll be to boost consumption, stabilise investment, and support exports during the 13FYP to achieve its growth target.

Furthermore, the government will continue to improve the social welfare system and further liberalise the labour market and the household registration system, in addition to other social reforms that rebalance the economy and enhance potential growth.

In addition, we expect reform of the state – owned enterprise (SOE) sector to gain momentum, with faster action at the local government level. The 13FYP will also emphasise policies to upgrade the manufacturing sector (“Made in China 2025”) as well as an overseas investment strategy (“One Belt One Road”).

Energy efficiency will be a focus in the 13FYP. In addition, despite recent turmoil in the st ck and FX markets, we expect the 13FYP to reiterate the ongoing financial liberalisation agenda in the areas of domestic financial markets, the capital account and RMB internationalisation.

Banking sector reform in China has been carried out progressively and with careful consideration over the past few years. In the upcoming 13FYP, our bank s analyst , Victor Wang, expects to see: 1) the potential completion of deposit rate deregulation; 2) the granting of more banking lic ences to private – sector investors; 3) more clarity on hybrid ownership reform; 4) an increasing possibility of a moderate relaxation of the foreign ownership cap on domestic bank holdings; and 5) early guidance on allowing banks to expand into other financ ial subsectors. Our insurance analyst, Noel Chan, expects improvement in the social welfare system to remain a key area of focus for the 13FYP, especially pension reform and health care – related reform.