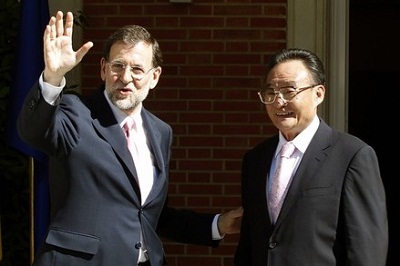 By Julia Pastor, in Madrid | China and Mexico made Spain’s day on Friday. Both countries announced several contracts with Spanish companies in very different sectors, injecting some movement in foreign investment flows into the lately much battered euro economy. While China signed agreements for an amount of €500 million, the Mexican oil company Pemex reported it will invest €247 million in Galicia’s naval sector.

In his official trip to Spain, the Chinese People’s Congress president Wu Bangguo packed in his bag a cooperation agreement in the form of contracts for Spanish product sale in the Asian giant valued at half a billion of euros. The biggest contract is the one signed between Telefónica and the Chinese company ZTE, which would supply visual control equipment development. The Asian manufacturer has a staff of more than 700,000 worldwide and more than 28,000 patents. The company has several offices in Spain, one of it just devoted to Telefónica deals. It markets in Spain around 25 kinds of mobile phones, mostly white labelled.

Eleven more agreements will be set among industries of very different nature: automotive, maritime transport, textile, olive oil, shellfish and raw materials. The companies involved in the package will be multinationals such as Mango, as well as medium size companies such as Borges, Pascual or The Port of A Coruña.

China has become one of the Spain’s most important commercial partners in the last years. It is the third country’s provider in the world, while Spanish sales to the Asian giant are growing by a 30% every year.

Furthermore, last February China supported Spain’s debt by buying €1 billion of sovereign bonds. According to government sources, president Mariano Rajoy thanked Wu Bangguo for this decision. The Chinese delegation confirmed his country’s willingness to further acquisitions as a proof of commitment to the euro and the Europen Union.

The other gift for the Spanish economy went to the northern region of Galicia and was addressed to its struggling naval sector. The Mexican oil company Pemex will invest € 247 million in the building of 14 tug boats. According to the agreement terms, regional shipyards will entirely build seven of those boats and cooperate with Mexican shipyards in the building of another seven.

The regional government estimates that the contracts will mean creating about 2.500 jobs. Alberto Nuñez Feijoo, Galicia’s president, also announced Pemex is weighing up the possibility of using the port of A Coruña as a logistics hub in Europe. Another proposal from the oil company would be to buy a boat hotel that is being built in Galicia shipyards. Pemex is the fourth oil company in the world. Its 2010 turnover mounted to €40 billion, over most LatinAmerica countries’ GDP.