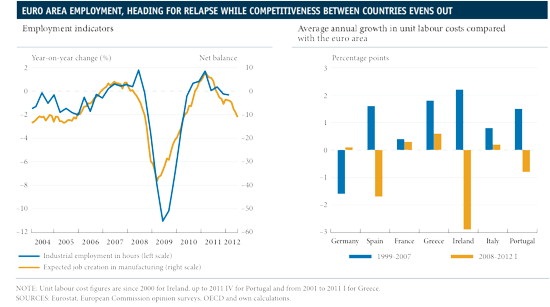 The deterioration in economic activity and great uncertainty is keeping the labour market lethargic, which is continuing to decline gradually.

Employment in the euro area fell by 0.2% in the first quarter of 2012 in quarter-on-quarter terms, a very similar drop to the one recorded during the last two quarters of 2011.

The largest countries of the euro area with data available for the second quarter (Germany, Italy and Spain) saw a percentage change year-on-year of 1.2%, 0.0% and -4.8% respectively. In fact, although Germany continued to create jobs, in Spain job losses became more acute and Italy saw a slight drop in its rate. This suggests that the situation of the labour market for the euro area as a whole has probably worsened a little more in the second quarter.

At the same time, the hours worked in the economy as a whole rose by 0.1% quarter-on-quarter in the first quarter, slightly recovering compared with the fall of 0.5% in the previous period.

Nonetheless, in year-on-year terms the rate of deterioration in employment in terms of total hours worked was higher than the deterioration in the number of people. This is because, initially, firms resort to varying hours as a means of adjusting to the situation in the economy, keeping their workers in reserve.

When this formula is no longer viable, firms also reduce their workforce. In 2009, at the peak of the recession, the rate of job losses in terms of people was 1.8% compared with the previous year, while the decline in the total hours worked stood at 3.4%.

During this second phase of weakness in economic activity, the loss in employment is following the same pattern, the contraction being more intense in terms of hours at first and, if economic weakness continues, then subsequently in terms of people.

On the other hand, June's unemployment rate remained stable at 11.2% after its May figure was revised upwards by 0.1 percentage points. This makes an increase of 1.2 percentage points in comparison with the figure a year ago and therefore remains at its highest rate since 1995. The divergence between countries is very wide, from Austria's minimum, with an unemployment rate of 4.5%, to Spain's 24.8%.

The figures for labour costs are somewhat more optimistic as indicators point to some signs of correction in the imbalances being carried out by euro area countries that have joined financial aid programmes.

If we compare developments in the average annual growth differentials for unit labour costs compared with the euro area, between 1999 and 2007, before the crisis, and since 2008 up to the first quarter of 2012, it can be seen that, in Ireland, Spain and Portugal for example, a significant proportion has been recovered of the losses in competitiveness recorded previously.

Greece is probably also carrying out this process although we only have comparable data up to the first quarter of 2011. Part of the adjustment observed to date results from job losses in low performing sectors, particularly in Spain and Ireland and, to a lesser extent, in Portugal and Greece, which has increased productivity overall. However, another part probably also reflects the structural measures adopted in order to facilitate the link between wage costs and the financial situation of firms.