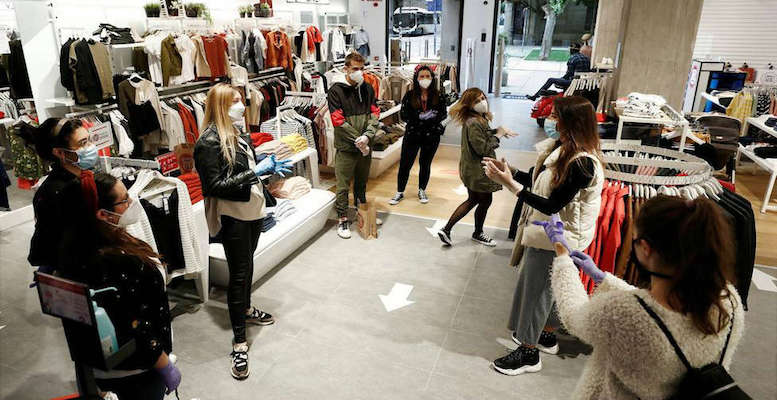 José Ramón Díez Guijarro (Bankia Estudios ) | The first weeks of the opening of the economies are serving to gauge the response of consumption, a key variable in determining the profile and intensity of the recovery.

US retail sales grew by 17.7% in May, well above expectations (8.2%), although levels are still almost 9% lower than at the start of the year. The breakdown shows that the 12 subgroups in the basket had positive growth in the last month, highlighting the rebound in sales of clothing and footwear (188%), electronics (50%), cars (46%) and restaurants (29%). They all benefited from the activation of the demand contained during the confinement. The fiscal programmes for aid to families injected more than 300 billion dollars into disposable income in the second quarter. Therefore the sharp increase in the savings rate to 33% of disposable income in April seems to be a forced move, due to the closure of shops, and not a sign of possible increases in precautionary savings. Especially if there is a rapid recovery in the labour force, as the surprising creation of 2.5 million jobs in May seems to anticipate. It is too early to draw many conclusions, as it is improving from very low levels and several family support packages are due to expire over the next month. And it is not yet known whether they will be renewed. But, even considering all of the above, it is probably once again possible to impose the old maxim of ‘never bet against the American consumer’.

In Europe, instead of using direct aid as in the US, they have preferred to activate temporary employment suspension programmes (ERTE in Spain, kurzabeit in Germany, etc). This measure is clearly the right one, as it allows the initial impact of the crisis on the labour market to be softened and delayed. It short-circuits the negative spiral of loss of disposable income, worsening of expectations, adjustment of consumption, etc. These programmes seem to be designed ad-hoc for a crisis such as the current one, with transitory drops in activity. They prevent families from anticipating a permanent downward adjustment in their income and, therefore, a movement towards an increase in the precautionary savings rate. In other words, they serve to reduce uncertainty. According to the ECB, the fall in household income due to the pandemic in the main European countries has been 7%, but without these programmes it would have increased to 22%. According to data at end-May, France had more than 13 million workers subject to these schemes (49% of total employment recorded in 2019), while in Germany the figure rose to 11 million workers (27% of employment). In our country, the significant number of workers who have been protected by these schemes (3.3 million) is also noteworthy. However, the rapid decline in the last month, when almost one million workers would have left the ERTES, is even more so.

In this context, also in Spain, the initial adjustment in consumption has been higher than that in disposable income and so there has been an increase in savings. Behind this, the “forced” component probably predominates in the face of the closure of businesses, as opposed to the precautionary savings caused by a deterioration in the expectations of permanent income. Which, in the absence of a resurgence in uncertainty, could end up being transformed into consumption in the latter part of the year, consolidating the reactivation of the last few weeks. Card payments made in person are already only 9% below the levels of the same week last year (-50% in April), while the number of operations is practically the same. A change in the spending pattern has also been detected, with a decline in the relative importance of essential goods and services (pharmaceuticals, food, etc.) which came to represent 75% of purchases during the quarantine.