Paul Krugman continues fighting back inflation scaremongers, who have been for years now barking at the devastating effects of the Federal Reserve’s monetary policies over the price and purchasing power of the US dollar.

Yet, inflation remains these days at its lowest being some 1%. Their reaction has been swift: it turns out it was not exactly inflation what worried them but the debasement of the dollar. Apparently, although inflation is down, the dollar might be suffering an erosion comparable to the German mark’s during the Weimar Republic days–and here we have it, the well-feared horrifying monster that comes from the darkness to eat up entire nations.

The problem for those who feed the inflation beast is that data don’t support their thesis. The moves of the dollar when the Fed has injected liquidity have not followed the tale as told by the pro-austerity gang. 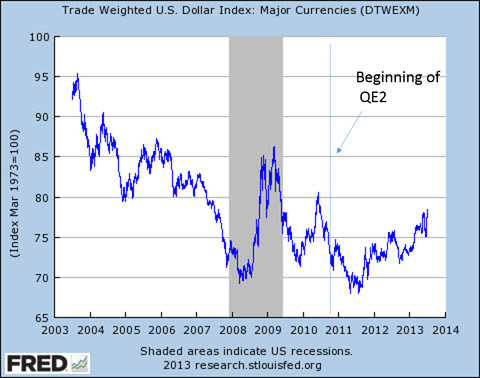 In fact, since Quantitative Easing programmes began, the dollar has been strengthened, that is, its price has gone up against the most used currencies in the international markets.

The usual suspects, nevertheless, kept up appearances and myths: their central argument was to point out that the dollar was crumbling against gold and that would ruin the US economy–since when one commodity has decided the future of the US economy..? But gold dropped with a loud crash. Didn’t they notice? Not really. Hyperinflation, gold and an increasingly weaker dollar is all pro-austerity extremists talk about. I still remember some articles announcing that a Saudi Arabian gold-pegged currency would oust the US dollar as the world’s currency…

Gold is a dangerous dream-maker and inflation scaremongers have placed it at the heart of their thin discourse. Gold’s dirty secret is that its supply is tight while its demand is volatile and capricious, so beware its cruel consequences before betting against the dollar.