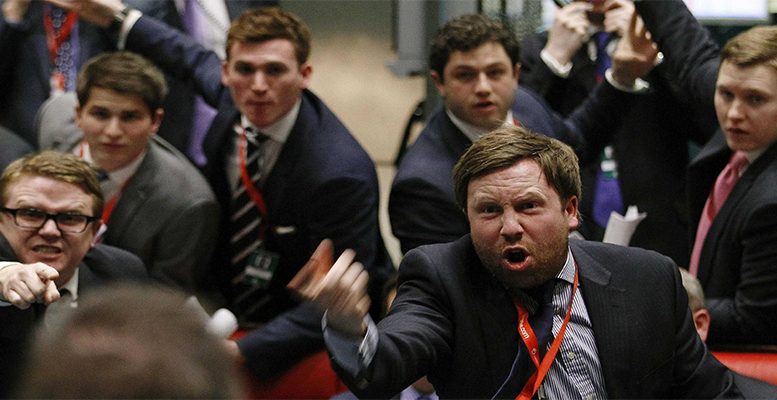 The global equity markets have come under pressure. Yesterday, the American S&P500 index had a temporary fall of more than six per cent in trading. At the opening of Tuesday trading it had rebounded in a volatile move to a 367-point rally. Now it has to be seen which is next Japanese Nikkei’s reaction. In Europe, the French and German markets closed with decreases of 2.30%, while the Ibex has ended up falling by 2.53% closing at 9,810 points.

What are the reasons for the apparent abrupt change in mood on the stock markets? Well, according to analysts from Flossbach von Storch there are basically three possibilities:

Firstly, the markets are starting to price in a recession – and thus a trend reversal in the equity markets.

This can never be ruled out, although we consider the likelihood of this to be low. Even if the economic upswing is already one of the longest in history, given its current relatively weak momentum, this does not mean that this upswing will soon be over. We expect the global economy will continue to experience moderate growth – and there will be no trend reversal on the equity markets in the near future.

Secondly, there is the fear of rising interest rates. Over the past few days, this has often been mentioned as a possible cause of the set back. In Flossbach von Storch’s opinion, this argument “appears not to be well-founded”, especially as yesterday in the US bond yields fell by twelve basis points.

Possibility three is a “cleansing storm”, a technical correction which they believe a great deal points towards.

For the past two years, stock prices have been moving upwards almost as if they have been drawn with a ruler. Fluctuations in value seemed to have been abolished until just a few days ago. Many (ETF) investors have been lured to the equity markets by this supposed “paradisiacal” environment or they have allowed themselves to be “lulled” into it. Some may have overestimated their tolerance for risk and are now selling quickly, which could explain the (at times) strong price movements within a single day of trading.

Finally, they assume that yet again computer-based trading systems or quantitative risk models, which are increasingly using ETFs as investment vehicles, have strengthened this downward trend.

This was similar to the so-called “Flash Crash” in the summer of 2015. When a growing number of investors do the same thing – that is sell – the prices will come under significant pressure when certain computer-defined price limits have been reached.

Another question raising from this unexpected sell-off is whether it means the end of the bull market. Dave Lafferty, Global Chief Strategist at Natixis IM don’t think so.

The global economy is still showing no signs of deteriorating and corporate profitability is strong.  This should backstop both equity earnings and credit fundamentals in the bond market.  However, we do think equity upside is limited to earnings growth (don’t expect P/E expansion) and the upside in credit is limited to clipping your carry (don’t expect a lot of spread compression).

Therefore, it seems clear the environment has changed, volatility is back, and 2018 is looking more complex for investors given central banks that are reducing stimulus. However, they should not get panicked from this pullback. Deutsche Bank’s strategists give a couple of reasons. On the one hand, the setback was “inevitable” given the extraordinarily uninterrupted rally in the equity market.

The S&P 500 had rallied a record amount of time (312 trading days) since it experienced a 3% pullback and it had rallied the fourth longest time period (405 trading days, in the 98th percentile relative to all other time periods) without a 5% pull back.

On the other hand, to put this into perspective, 2017 marked the first year since 1995 the S&P 500 did not experience a 5% pullback. Historically, the market experiences, on average, more than 3 five percent pullbacks a year. Furthermore, while this was the largest two day loss on a point basis for the S&P 500, it was just the 117th largest two day decline on a percentage basis since 1929.