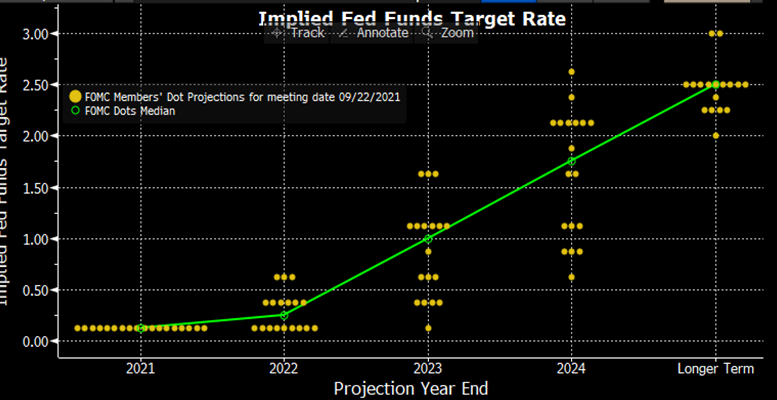 Simon Harvey (Monex Europe) | While every sell-side analyst didn’t expect the FOMC dot plot to signal a rate hike in 2022, markets had other thoughts. While two members shifted their expectations to move the median dot plot to signal rates at 0.3% in 2022, this under-delivered in the eyes of rates markets. The price of eurodollar 2022 futures rose, in turn lowering the expected interest rate, while risk was well supported across high beta FX pairs, especially where policy normalisation is expected to happen at a faster rate than in the US. We don’t expect Fed Chair Powell to go against market price action when taking to the microphone at today’s press conference and discussing the dots, largely due to the underwhelming August Nonfarms data and his predisposition to sit on the more cautious side of the spectrum. However, we expect Powell to set up a formal announcement of QE tapering at November’s meeting, with the announcement itself hinging on subsequent labour market reports and whether they print in a more supportive manner, while we expect him to deflect questions that lean towards more formal forward guidance on the pace of tapering. On the subject of QE, the minor shift in today’s dot plot does show the potential for faster QE normalisation. Whether the tapering will occur in a fast enough manner to facilitate a rate hike next year looks set to be a question that will be delayed until a later date.

Post-press conference: back to square one after Powell announces faster QE tapering

Against our initial expectations after the rate statement, Fed Chair Powell indeed took to the press conference and announced additional forward guidance on the pace of the Fed’s tapering timeline. By stating that there was broad consensus on the time and pace of the tapering process such that it ended in mid-2022, the dot plot can now be viewed in a more hawkish light as the speed of tapering sits at the faster of the spectrum and allows a greater grace period in between the taper and a potential rate hike. This arguably tips the probability of a rate hike next year more in line with the 50% chance outlined in the dot plot, and the move is now being displayed in front-end yields, while Powell’s comments have also weighed on the initial risk rally in FX markets.

For those looking for an explosive Fed meeting, they may have initially been disappointed by the alterations in the dot plot. However, Powell’s comments meant volatility wasn’t absent in the FX space, with the likes of EURUSD swinging within a 0.55% range and USDJPY climbing over half a per cent higher on the day.

The next step for markets will be determining who the swing voters in the 2022 dot plot were, while also assessing the conditions necessary for individual 2023 and 2024 interest projections to become a reality once individual Fed members take to the media. Beyond that, the pace of the taper will remain in scope, especially amid speculation that the process may not be adjusted at each meeting but instead on a monthly rate and the speed of tapering may not necessarily follow a smooth $15bn per month path such that balance sheet expansion ceases in June 2022.