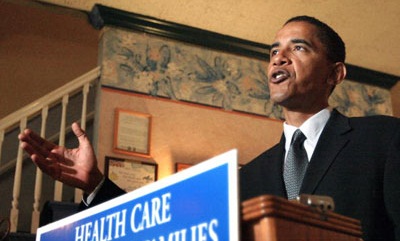 NEW YORK | Respected subscribers, my inbox is on fire. Democrat’s Campaign managers Jim Messina and Jen O’Malley, Vice President Joe Biden… even Michelle Obama wrote me in the last two days. It is clear. Unofficial, but clear: Democrats campaign is on.

And everybody agrees the main theme is going to be… The Economy.

But there is going to be a whole of juicy political battles surrounding another subject, one could say the second most important one in Washington: The Affordable Care Act, passed two years ago this Friday 23 March.

And a lot of those e-mails that me and millions of Americans are receiving are just to remind us what that Act, also known as Obamacare, is about. In the White House’s own words:

One that “has rescued millions of people from difficult and sometimes heartbreaking situations they shouldn’t have to face.”

Dems even launched an online application to explain it in down to plain terms. An example: if you select that you are uninsured, it promises you that

“by 2014, the health care law will help nearly all uninsured Americans get coverage.”

Obamacare is heavily criticized by the all the republicans. Even by Mitt Romney, who created a pretty similar healthcare system when he was governor of Massachusetts. GOP candidates have been competing to show which one is going to be faster in repealing Obamacare once they get to the White House. I kind of remember Newt Gingrich even saying he will repeal it the very same Inauguration Day. He said that when he seemed to have options to win the nomination, though.

The Affordable Care Act reforms the private health insurance industry, and the public system. It fights against the exclusion for pre existing conditions by insurance companies. But the main point is that it tries to expands access to insurance to more than 30 million Americans and lower the costs by a very controversial provision: it mandates that each individual purchase a health insurance policy, with help from the government if they can’t afford it.

Can the government force anybody to purchase any product? This works in Switzerland, ok, but, is it in compliance with the US Constitution? Next Monday March 26, the Supreme Court will hold three days of hearings on challenges to the constitutionality of the Act.

Of course this is massive. They say is one of the biggest Supreme Court decision in decades. And obviously the result will impact November’s presidential election. That’s why everybody is on full swing: democrats defending it, republicans opposing it with all that they have.

Be the first to comment on "Game on: US healthcare hullabaloo"