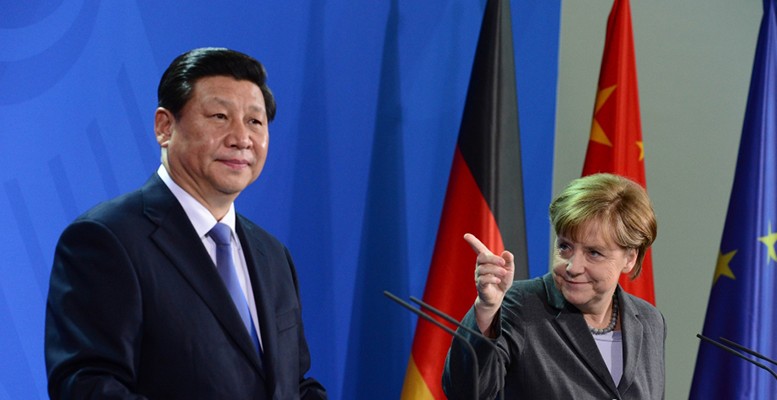 Michael Clauss via Caixin | Germany’s chancellor, Angela Merkel, arrived China on Thursday on her eighth visit to the country. This is proof that our partnership is stronger and closer than ever. Maybe even more importantly, it is more necessary than ever. In today’s world, our two countries can make critical contributions for the solution of a number of burning global issues. Here are but a few examples.

* Michael Clauss is the German ambassador to China.

Numerous countries, ranging from North Africa and the Middle East to Asia, are in the throes of severe crisis. For this reason, an unprecedented number of refugees from Syria, Libya, Eritrea and as far away as Afghanistan are coming to Europe this year. The main causes for these crises are political instability due to the exclusion of underprivileged population groups, military or paramilitary violence, a lack of prospects in particular for young people and the ever-growing threat of terrorism. At present, Germany is the most important destination for refugees in Europe. Together with European and trans-Atlantic partners, Germany has been active for years to combat the causes of the crisis in Syria and other countries. However, China’s interests are also affected to a considerable degree. Avoiding infiltration by terrorists and contributing to stability in the Middle East are both aims that are important to China’s security and economic development.

The situation in Ukraine continues to be high on the agenda. Here, Germany also plays an important role, for example, in the so-called Normandy format, in partnership with France in order to reach a political solution with Russia and Ukraine that respects the sovereignty and territorial integrity of Ukraine. China, with its close relations to Russia and also its substantial ties to Ukraine, can play a constructive role that conforms to its status in the world and as a permanent member of the UN Security Council. This is not just a regional conflict. What is at stake is preventing a new global split after the end of the Cold War. Germany and China have both benefitted enormously from the end of the Cold War, a change that ushered in a wave of globalization of unprecedented proportions. For this reason, we have a common interest in preventing new obstacles or the redrawing of borders against international law.

Germany and China have cooperated very successfully this year toward the solution of one of the greatest challenges to global security, namely Iran’s nuclear program. The agreement with Iran has been the greatest success of international crisis-solving diplomacy this year. I believe that the cooperation of decisive actors could also be the key to solving other crises, such as in Syria, and our two countries can make crucial contributions. Our historical experience and our political systems might be very different, but we do share many fundamental views, for example, on the critical importance of healthy economic development to peace and stability. Furthermore, we share the experience and the realization that the willingness to reform is fundamental to economic development.

Without reform and the constant quest for innovation, countries will fall behind internationally. This applies to Germany as a highly developed industrial economy just as it applies to China, which is priming itself to close the gap with leading industrialized countries. For both of us, innovation is the key to success. This requires the willingness for constant reform of the economy and society. The biggest breakthroughs in innovation are not made under controlled lab conditions, but rather when we allow in the fresh breeze of competition. An unhindered flow of information and exchange of opinions are as important to this as the elimination of market barriers.

We have great confidence in China’s ability to reform. The current slowdown in growth is a normal phenomenon because it is connected to a necessary restructuring toward more sustainable growth. If China’s course toward further opening and reform is strengthened now – through strong signals from the top and vigorous implementation from the bottom – I am very optimistic that the country will master its economic challenges and contribute decisively to global economic growth in the years to come.

Germany wants China to succeed in this way, without second thoughts or fears of losing out. The development of German-Chinese economic relations is living proof that China’s rise is not a zero-sum game to the detriment of others.

One particularly important field of our cooperation is innovation in industrial manufacturing, which is on the doorstep of another industrial revolution. No country delivers more high-tech industrial goods to China and hardly any other country invests more in this sector of China than Germany, and this includes research and development. Our trade relationship of more than 150 billion euros and our investment relationship of around 50 billion euros are focused on the area of high technology. We want to expand this cooperation vigorously, which is also necessary to ensure that China’s modernization program, called Made in China 2025, achieves the success it deserves. One highly important element is digitization of our industries. The Industry 4.0 concept plays a crucial role in this process. Some German companies have started cooperation with Chinese partners in this field, a development I expressly welcome. In order to turn a trickle of individual investments into a broad stream we will have to work together to improve framework conditions. Important elements are fair competition, data security (not only in China, by the way), the effective protection of intellectual property, and not least of all the speed of Internet connections.

Successful technological innovation also requires that society provides the necessary conditions in the areas of education, social systems and rule of law. For this reason, all these areas are part of our innovation partnership, which we concluded in 2014. Without a creative and open education system, innovation cannot come into being. Without rule of law, economic and social development cannot flourish.

The protection of natural resources and our climate is a crucial challenge of our age. I am convinced that industrialized economies will only stand the test of international competition if they are capable of innovation, and deal with energy and natural resources in an efficient and sustainable manner.

On September 25, international leaders adopted the 2030 Agenda for Sustainable Development in New York. With its 17 goals, the agenda combines the three dimensions of sustainability, economic capacity amid limited natural resources and social responsibility, thus addressing the main tasks for the future of our world. Vigorous and ambitious implementation of the agenda by both Germany and China would make an important contribution for the international community as a whole.

Furthermore, we want to adopt an ambitious climate agreement in Paris at the end of the year, one that commits all states toward greater efforts to protect our climate. This is an important aim of the German government. With the Paris agreement, we must succeed in clearing the path toward keeping the rise of global temperature below 2 degrees Celsius. China and Germany, together with members of the European Union, along with many other states, have presented their intended contributions. However, we can see already that the voluntary contribution of states will not be sufficient to get us onto a global development path that is compatible with the 2 degree goal. Therefore, we need a joint and concrete vision that guides our actions, as well as a global long-term aim that serves as a yardstick for our efforts and gives clear orientation for national and international strategies. For this reason, the G7 countries this summer agreed on the aim of decarbonization of the global economy this century, in line with the recommendations of the most recent report by the Intergovernmental Panel on Climate Change. In addition, we have to create a framework that enables us to increase our ambition step by step on this journey and to adapt our efforts to this goal. In concrete terms, we need a mechanism that checks on a regular basis whether our measures are sufficient to stay within the 2 degree upper limit and that enables us to jointly increase our efforts. The Paris conference has to send out a signal for a paradigm shift toward a low-carbon and climate resistant global economy. We hope for China’s support in this endeavor.

The Friendship of People

High-level political exchanges are indispensable in order to promote peaceful cooperation between important powers. However, trust and understanding between people is at least as important. I often feel touched by the many expressions of deep friendship with Germany by a great number of people in China. I am convinced that the more people in the two countries visit, study, research and work with one another – in other words, the more people learn about the other country from personal experience – the more solid the basis of our excellent political and economic relationship will become. Such exchanges are not about blurring differences. Their deeper purpose is to make as many people as possible realize that neither Germany nor China can be reduced to a simplistic formula, but that both countries are a rich tapestry of many facets – well worth exploring in the spirit of friendship.