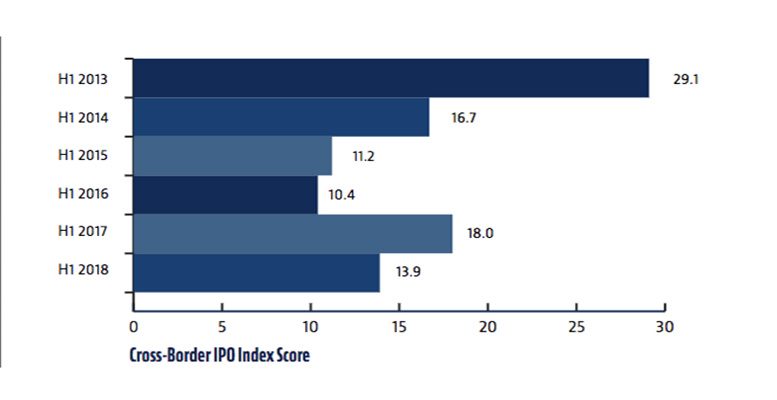 The first half of 2018 has witnessed a dip in global IPO activity as a result of lower capital raising in Asia Pacific and EMEA, according to the latest research from Baker McKenzie. Worries around geopolitics – in particular US President Trump’s protectionist policies as well as a lack of progress around Brexit negotiations –weighed on investors’ minds and dented the headline numbers.
A total of 676 listings were recorded in H1 2018, a fall of 20% on the same time last year. The value of those listings also fell, down 15% to USD 90 billion.
In Spain, just one listing on the stock market was carried out during the first semester of 2018, Metrovacesa, which implied a notable decrease in transactions against the three that were performed in the same period of 2017. These figures stand far from the record of 21 IPOs of six first months of 2014 and 2015, as shown in Baker Mckenzie’s report about cross-border IPOs.

Investors appear to be adopting a ‘wait and see’ approach in light of both the US and UK political situations and increased market volatility. The dip in Asia Pacific and EMEA only slightly offset by stronger cross-border capital raising in North America and higher domestic listings in Latin America.

Cross-border deals proved active in the first half of 2018 with a surge in capital-raising in North America leading the charge. Deals totalling over USD 16.6 billion were recorded, a jump of around 15% on the same time last year. The number of deals also climbed, up 18% to 85, with three of the top ten cross-border IPOs debuting on North America exchanges. This resulted in Baker McKenzie’s cross-border index value rising to 17.4 from 13.2 in H1 2017, just below the highest recorded of 18.7 in H1 2014.

Unsurprisingly, the New York Stock Exchange (NYSE) and Nasdaq were the leading stock exchanges for all IPOs in terms of value and volume.

The London market appears to be bearing the brunt of concerns around the Brexit process with both the value and volume of deals recorded there dropping sharply. Capital raising fell by 50% for the first half of 2018 to USD 4.6 billion while the number of issues fell by 9% to 32.

When it comes to issuer headquarters, the US was the most active in terms of number of deals issued at 107, followed by India with 95 and China with 79.

The US also topped the table in terms of capital raised with USD 23.3 billion, followed by China with USD 19 billion and Germany with USD 8.7 billion.

The most active cross-border issuers came from China with 31, a total of 18 of which were listed on the Hong Kong Exchange, the rest in the US.

So far there have been fewer withdrawn IPOs in the first half of the year compared to the same time last year. A total of 11 IPOs worth USD 1.5 billion have been withdrawn compared to 23 worth USD 783 million.