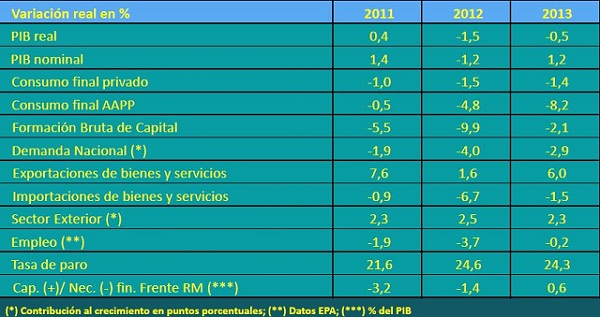 The easiest would be to follow the trend and undermine the 2013 budget that Madrid just made public. But instead, we'd rather put numbers in context before dismiss them as unsustainable or impracticable.

First, the stability of the macroeconomic picture taking in account data from July. Is the Spanish government right in its expectations of a GDP contraction in 2013 of -0.5 percent? Analyst consensus in Spain draws a different figure, -1.1 percent, quite similar to the International Monetary Fund's -1.2 percent.

The same doubts offer the official forecasts for this year's fourth quarter, in which estimates indicate GDP fall would be in line with that of the second quarter, -0.4 percent, although markets believe it to be in the range of -0.6 percent and -0.8 percent.

The only answer to these questions is uncertainty. In a few weeks we'll have some hard facts, but one can only say that we will need 12 months to confirm how the country's economy behaves. And it is to long, at a time of tensions and pressures.

It is obvious that this is a government making an herculean effort, even though over a 56 percent of it has been supported on tax rises, which always is a dangerous bet. Spain's crisis isn't just cyclical but also structural. The size of the structural spending is too big, and a harsh fiscal policy does not tackle the basic problem while depressing further the demand.

Some measures taken Thursday (limiting early retirement, adjustments in size of public sector) will slow down the deterioration. And reforms approved in order to push for potential growth are right; they will need time to render visible profits, though.

In the short term, the difficulties are still to be found in the financing department. Spending cuts, as positive as they are, can do so much to dispel the lack of trust markets show about the health of the Spanish economy in coming scenarios.

The consequences are out there for everybody to see: interest payments will reach €38 billion in 2013, €10 more billion than this year. Pension spending will increase by 4.9 percent but public payroll will shrink by 3.9 percent. Finally, tax income will go up by 3.8 percent.