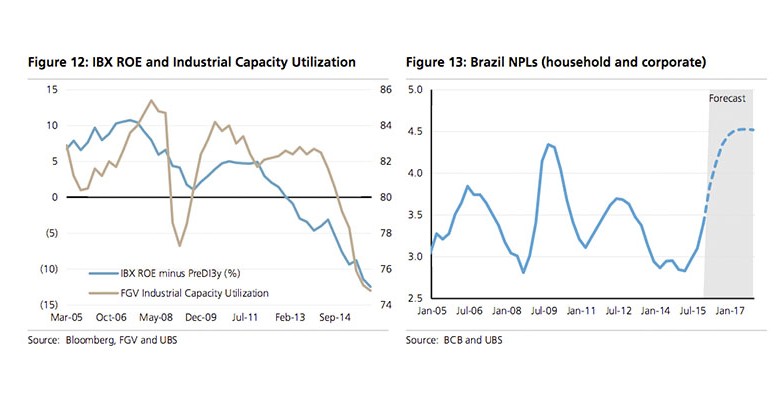 UBS | Brazil is arguably facing its deepest recession since the 1930s. However, the recent improvement in investors’ perception of the country, combined with data suggesting economic activity is stabilizing, raises the critical question of whether Brazil has reached an inflection point.

The data clearly show that the external sector is adjusting

Surprisingly, the FDI inflow has been stronger than we expected. It reached 4.3% of GDP in 2015 (US$75bn) vs. 4.0% in 2014 (US$96.9bn), which is more than enough to cover the CA deficit. In addition, despite the downgrades by credit-rating agencies, portfolio inflows to domestic bonds and equities, though lower than before, remain positive. With the CA adjusting and no capital outflow, Brazil is not at risk of a BoP crisis in our view. In fact, we think the external sector is the main hope for the Brazilian economy to get out of recession.

Looking at the recent evolution of confidence indicators, we see a decoupling between activity data, which continues to fall, and confidence data, which show stabilization or a slight recovery. To create a leading indicator based on the confidence indices, we weighed the expectation component of all survey s based on the sector’s corresponding weight in GDP. This indicator suggests the decline in GDP will slow in the coming quarters, which is consistent with our forecast that GDP will contract at a slower pace each quarter until Q316 and stabilize in Q416.

Nevertheless, adjustment in domestic demand has further to run

Domestic demand has fallen by 11.3% since Q114, returning to 2010 levels. However, it looks like we are still in the middle of the economic cycle. Private consumption will likely continue to suf fer from weak employment and high inflation and interest rates, while large spare capacity and low corporate earnings will likely weigh on investment. We still see investment contracting by 14% in 2016 and by another 1.6% in 2017, while private consumption may fall by 4.4% this year and stabilize next year (+0.7%).

Despite the improvements in the external sector and in confidence data and the sharp correction in business inventories, we see little to no growth drivers that could boost domestic demand and lift Brazil out of recession at this stage. Given the nature of Brazil’s current situation, we believe reversing this negative trend would require a more stable political environment conducive to the profound economic reforms likely necessary to resolve the country’s fiscal problems. While progress in this direction is possible, we need to bear in mind that promoting deep reforms may not be that easy. This foreseeable fiscal challenge is considerable and would likely have to be addressed with the economy still in recession and in the context of a potentially less favourable global environment in the coming years.