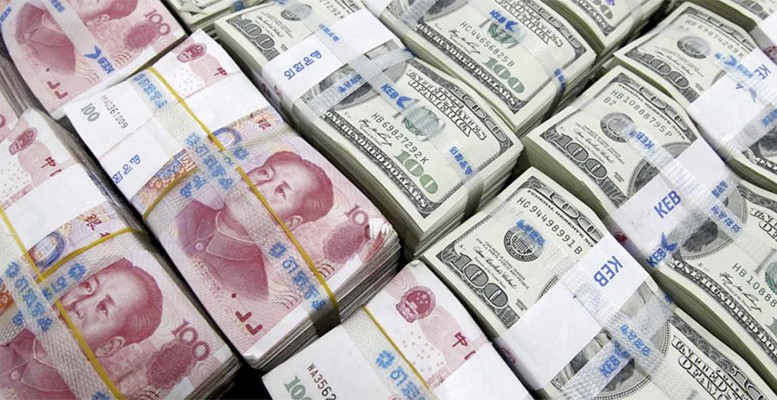 Marc Chandler via Caixin | It is fashionable to talk about currency wars. First, it was the United States who was accused of devaluing the dollar to boost exports. Then Japan with the launching of Abenomics. Now China stands accused of pushing its currency down. Is there really a currency war going on?

If it is, it is a strange kind of war. None of the purported belligerents or victims acknowledge any hostilities. Neither do organizations like the IMF, G-20 and G-7. We can accept the realist view that international affairs feature competition between countries without accepting that the foreign exchange market has become a battleground.

There is an arms control agreement in foreign exchange. The G-7 and G-20 officially recognize that beggar-thy-neighbor competitive currency devaluation is the economic equivalent of MAD, or mutually assured destruction. They have agreed to avoid such behavior.

It is clear then that such an accusation is serious and needs to be supported with evidence. There are several problems with accusing China of using the tactics of a currency war. One has to establish that the currency has in fact weakened. And by weakening, it needs to be on a trade-weighted basis, not just against a few currencies. The Bank of International Settlements (BIS) tracks such a measure. The last monthly data point was November, and it was at record highs.

Since the low in 2004, six months before the peg to the dollar was loosened, the yuan appreciated by 60percent on a real broad trade-weighted basis according to the BIS measure. It appreciated 13.5 percent from the mid-2014 low to the November 2015 high.

It is possible that the inflation differential skews the results. The BIS tracks a nominal effective exchange rate for the yuan as well. It has performed similarly. It appreciated 52.3 percent from the low recorded in 2005. Then, it rose nearly 13 percent since the low near mid-2014 through this past November.

To see how the yuan has performed since November, we have to turn to private sector estimates. Bloomberg makes available Westpac’s measure of the yuan’s real effective exchange rate. The inflation-adjusted (real) measure rose 53.3 percent since the 2005 low and 13 percent from the 2014 low. The nominal index rose from 50.2 percent since 2005 and about 15 percent from the 2014 low. This is cited to show that the private sector measure is a reasonably close approximation of the BIS index.

Since the latest data point from the BIS from November through January 15, the Westpac nominal effective yuan index weakened by 2.5 percent. The real effective index declined by 1 percent. While this is a decline, it is not significant and cannot be fairly said to be a shot in the currency war.

China has not allowed market forces to take the yuan as low as could have been the case. We note that the People’s Bank of China reported a record US$ 108 billion decline in reserves in December. Given that the euro and yen appreciated against the dollar that last month, one would have expected the value of China’s reserves to have risen, all else being equal. Far from driving the yuan lower, Chinese officials used some of the reserves it accumulated to slow the yuan’s decline.

In addition to a weaker currency, a currency war is about boosting exports. Last year, Chinese exports contracted in all but two months on a year-on-year basis in dollars and three months in yuan terms. Due to a collapse in China’s import prices (read commodities), its trade surplus has grown, not because of exports.

Not only has the yuan hardly fallen, and exports been weak, but the central bank has been trying to moderate the market pressure. In December, when China reported its reserves fell US$ 108 billion, and if anything, may understate the central bank’s purchases of yuan.

The cries of currency wars also misunderstand China’s motives. Chinese officials are trying to foster an economic transition toward a stage emphasizing services and consumption. A weak currency retards this process.

While short of a currency war, China is running afoul of its own policies. It linked the yuan to the dollar very tightly even when the economic cycles diverged. It now recognizes the need to decouple. Market forces are driving the dollar higher on a broad trade-weighted basis. Macroeconomic considerations suggest the yuan should not be an exception.