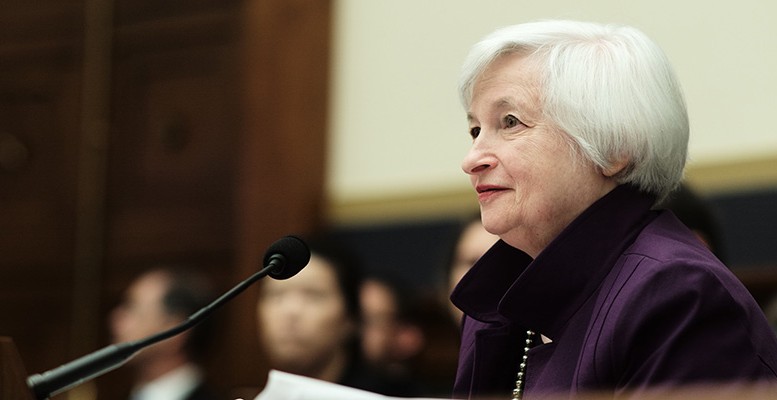 Janet Yellen’s delivery was widely expected. The Fed funds’ moderate rise was bang in line with the market’s bets. She also conveyed a message of dovish commitment to thinking twice before engaging in any further monetary tightening. The kind of language investors were eager to hear from the Fed’s Chair.

Yet it is no secret that she grabbed the last chance available to fulfill her heralded promise of increasing rates before the close of the year. A rather reckless commitment which any seasoned central banker would refrain from making. As the months went by, the global economic climate sharply deteriorated, turning her promise into a risky gamble. Markets angrily reacted when she failed to secure enough support amongst her colleagues just before the summer break. Having missed this opportunity, she was facing a bleak outlook. The Chinese crisis snowballed into a complete meltdown in raw materials and oil prices, reducing home inflation and growth prospects.

The latest Fed move stems from a keen interest in asserting its authority, badly undermined by the inability to deliver what its Chairwoman had promised long ago. But she proved unable to provide substantial evidence that inflation expectations are moving upwards. She was also forced to admit that while unemployment, at face value, is at extremely low levels, the US labour market still has ample room for improvement. Growth performance is reasonably stable, but there is nothing to lead us to believe it could accelerate in the future. Janet Yellen seemed unconvincing in her press conference when justifying the rate rise. It was by no means the only loophole in her message. She totally failed to deliver clear guidance on monetary policy in the coming months, advocating instead a piecemeal month-to-month appraisal.

For all her efforts to convince the markets that monetary policy will be back to business as usual, the cumbersome heritage of the liquidity glut will severely limit Yellen’s room for manoeuvre. The Fed has committed to reinvesting all the proceedings from its large asset holdings, thus preventing a devastating run on the debt market. It will also embark on a $2 trillion reverse repo offer to challenge higher rates outside the shrinking banking system. While these moves appear entirely warranted, they expose the awesome task of recovering monetary orthodoxy when the Fed’s balance sheet looks so bloated. Doing away with excess liquidity will prove a formidable hurdle for implementing a sound policy. Let’s hope the Fed can cope with this challenge in a sensible way, as otherwise it would inflict extensive damage on the world’s financial stability.